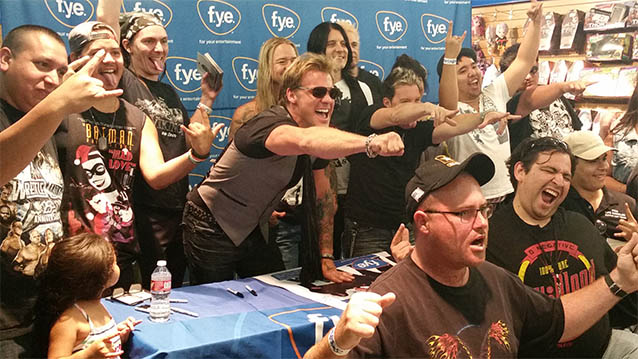 In concert with f.y.e., BLABBERMOUTH.NET is proud to announce a series of guest posts written by FOZZY's Chris Jericho. Join us in offering a warm welcome with this first installment that features Chris riffing on a string of recent releases, including FOZZY's own recent effort, "Do You Wanna Start A War".

"I was pretty shocked when I heard Angela Gossow left, though I've heard some of their new stuff with the new singer, Alissa, and she's done an amazing job. As always, guitarist, Mike Amott's riffs are killer and These guys do melodic death metal better than anyone out there."

"Couldn't ask for a nicer bunch of guys and they've delivered a great record, probably their best yet. This is the type of metal that you and your bros sit and listen to while playing poker and drinking vodka, which is what my bro Vinnie Paul and I do whenever we hang!"

"My good friend and Metal Blade/metal icon Brian Slagel met up with me recently over burritos bowls at Chipotle and gave me this record. I'm really happy for these guys for rebounding after being dealt a bad hand and wish them the best of luck. It's a great album... maybe not as good as Chipotle burrito bowls, but those set the bar extremely high..."

"Is this a 6-CD box set? Is the entire 'Too Fast For Love' album on there? Listen, this better not be their farewell tour, the world needs a showmanship and a bit of danger in rock and roll now more than ever. Nikki's songwriting and Mick's guitar work are totally underrated and hearing the classics in this collection prove it."

"These guys played the same day we did at Download this year. Unfortunately, I couldn't catch their set but now I have this DVD to watch on the bus in between my KISS and IRON MAIDEN bootlegs. Nice homage to METALLLICA and Cliff on the cover, guys!"

FOZZY - "Do You Wanna Start A War"

"What can I say about my own band?? How about I just let Rolling Stone magazine say it for me, about our hit single, 'Lights Go Out': 'A gut-checking heavy-metal slow burner that does a great job of mixing fighting and fucking metaphors.' What more do you want?? 'Do You Wanna Start A War' is our best and most diverse record, which mixes ballads, shredders, gargantuan riffs, great melodies, theramins, and a cover of ABBA's 'SOS' that will kick your ass! The only rule we had in making this record was that there were no rules, so check it out and catch us on tour with THEORY OF A DEADMAN next month!"

Pick up any of the selections above at your local f.y.e. store or online.