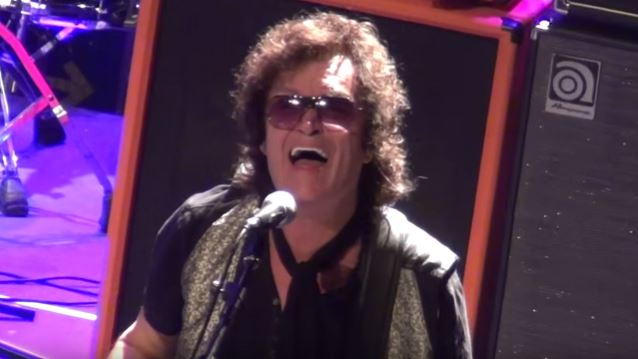 Glenn Hughes spoke to the Danish metal magazine Metalized about BLACK COUNTRY COMMUNION's plans to reunite for a fourth studio album in 2017.

Regarding how the reunion came about, Hughes said: "In February I was doing an interview with Gary Graff, the editor of Billboard magazine in America. Gary asked me some questions about [DEEP PURPLE's Rock And Roll] Hall Of Fame [induction]. I said to him that I don't think I will ever be in a band again after BLACK COUNTRY because the legacy of those three albums was so mighty and the band was so good with each member being very, very good. I said to him that BLACK COUNTRY COMMUNION will be the last band I play in. Three weeks later, Joe Bonamassa calls me for dinner. I had no idea why."

He continued: "We're friends. We've always been friends. People thought we weren't friends. He said, 'Hey, don't you think it's time we make another great album?' I said, 'I do. And do you know that this is the last band I am gonna play in?' We joked about it.

"Joe and I are very friendly. We never ever fell out. Joe is a solo artist as I am now.

"The fans on the Internet thought we were fighting. We never fought.

"When Joe and I had dinner in March in L.A., we hugged each other and said, 'Hey, we're friends, we're family.' I am a big fan of Joe as a person and a musician, and I like his fans."

"We are going to do this one step at a time. Let's do the album and think about doing some shows. Let's see what happens. Let's embrace it."

Asked about his expectations for the fourth BLACK COUNTRY COMMUNION album, Hughes answered: "I think the world needs another big rock album.

"I love BLACK COUNTRY COMMUNION so much, and I am so happy that we're getting back together again.

"BLACK COUNTRY COMMUNION really gave me so much energy to write.

"When I joined the band, Joe and I were working for a year before Jason and Derek and Kevin [Shirley, producer] joined. Joe and I were working together writing in 2009. He was doing great, coming up as a solo artist. He said to me very kindly that he was a solo artist and that he was going to be a solo artist for the rest of his life. And I said to him, 'That's fantastic.' I never asked him to change and be in a band with me. I had other things going on, I had other people to play with.

"Joe and I knew that he was going to continue and BLACK COUNTRY COMMUNION would be a band that would play shows from time to time. That was it. We did 33 shows in all in three years which isn't very much. Again, there was no expectations to play anymore. But when we broke up, there was the factor: if you can't play any shows, there's no point making new music. You know, I was writing all the time.

"I said to Joe, 'I think I should go back and make a solo album,' and he said, 'Great!' And that what's happened. My first thing is my solo career now."

BLACK COUNTRY COMMUNION's third album, "Afterglow", sold 8,500 copies in the United States in its first week of release to debut at position No. 48 on The Billboard 200 chart.

BLACK COUNTRY COMMUNION's self-titled debut album registered a first-week tally of 7,100 copies to enter the chart at No. 54.