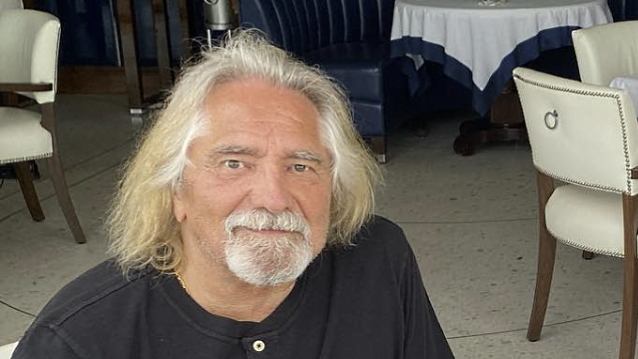 During an appearance on yesterday's (Thursday, April 28) episode of SiriusXM's "Trunk Nation With Eddie Trunk", BLACK SABBATH bassist Geezer Butler spoke about the status of his upcoming autobiography. "[It's] finished," he said (as transcribed by BLABBERMOUTH.NET). "I sent the manuscript in three weeks ago, so now I'm just waiting for the edited version to come back so I can go nuts."

He added: "The trouble is ever since I sent in the manuscript I thought about seven things I've left out. So I'm gonna probably drive them nuts now."

Asked when fans can expect to see the book released, Geezer said: "I think it's looking like the beginning of next year now."

Geezer first announced the completion of memoir in a tweet on April 6. At the time, he wrote: "Just turned in the 1st draft of my book so I'm now thinking of titles. So far, I have: Into the Void, Basses Loaded, Past Forward, What The Butler Did, Bassic Instinct. Feel free to send me which of those you think would suit my #autobiography".

A year ago, Butler told Cleveland.com that he started writing a memoir "because when my parents died, I always wished I'd asked them a lot more things than I knew about. I don't really know much about my mum and dad, 'cause they were always just there," he explained. "So, I started writing a memoir for my grandkids to read, and that's been fun going through stuff — old times and growing up in Birmingham and all that."

In the fall of 2020, Butler told Australia's Wall Of Sound that his book would be "about growing up in Aston, Birmingham and how SABBATH came about." The bassist also reflected on everything he has accomplished in this past half a century, saying: "It's a great achievement to still be relevant 50 years after we recorded our first two albums. We honestly thought we'd last a few years, then be forgotten about. Fifty years ago any form of popular music was seen as a passing fad — people even thought THE BEATLES would be forgotten about after they broke up, but nobody then [realized] how powerful the nostalgia effect would be."

Although SABBATH will not tour again, Butler, Osbourne and Iommi have not ruled out recording together.

Geezer is the third member of the original SABBATH lineup to release an autobiography. Ozzy's memoir, "I Am Ozzy", debuted at No. 2 on the New York Times' "Hardcover Nonfiction" best-seller list. The book was published on January 25, 2010 in the U.S., nearly two years after it was first expected to arrive. "I Am Ozzy" chronicled the legendary metal icon's life from his working-class beginnings in Birmingham, England to his initial fame with BLACK SABBATH to his massive solo career and forays into television.

Osbourne won the "Literary Achievement" honor for "I Am Ozzy" at the 2010 Guys Choice Awards at Sony Pictures Studio in Culver City, California. Ozzy was presented with the award by Sir Ben Kingsley.

Iommi's memoir, "Iron Man: My Journey Through Heaven And Hell With Black Sabbath", was released in hardback in November 2011. It landed at position No. 35 on the New York Times' "Hardcover Nonfiction" best-sellers list. Da Capo reportedly paid a six-figure amount at auction for the rights to the 352-page book, which was described as "'Angela's Ashes' meets 'The Ground Beneath Her Feet' meets 'Spinal Tap'" by Foundry Literary + Media co-founder Peter McGuigan, who completed the North American rights deal for the memoir.

Just turned in the 1st draft of my book so I’m now thinking of titles. So far, I have:
Into the Void
Basses Loaded
Past Forward
What The Butler Did
Bassic Instinct
Feel free to send me which of those you think would suit my #autobiography