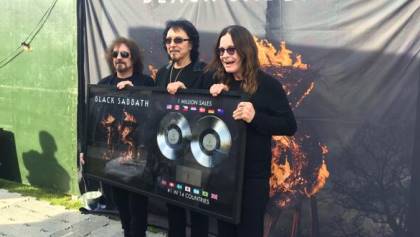 BLACK SABBATH members Tony Iommi (guitar),Geezer Butler (bass) and Ozzy Osbourne (vocals) were presented with a platinum plaque on Friday, July 4 at London's Hyde Park for worldwide sales in excess of one million copies of the band's comeback album, "13". The CD was released in June 2013 via Vertigo/Universal Republic in the U.S. and Vertigo in all other territories.

"13" debuted at No. 1 on the Billboard album chart, the first SABBATH album to ever top the U.S. chart.

The disc features Ozzy, Butler and Iommi playing together for the first time in 35 years. Their last effort together was 1978's "Never Say Die!"

"13" has sold more than 368,000 copies in the United States since its release, according to Nielsen SoundScan.

A contract dispute led drummer Bill Ward to sit out the reunion, which was also marred by Iommi's cancer diagnosis in early 2012.

Iommi has said that BLACK SABBATH's massive July 4 gig at London's Hyde Park could ended up being the band's last because the touring can be tough on him. But in a recent video message, Iommi sounded more optimistic about the prospect of returning to the road, telling fans, "We'll see you on the next tour."

Osbourne and Butler recently seemed to have slightly different takes on whether the reunited band will record a follow-up to "13". Asked about Iommi's remark that the concert in Hyde Park could be their last, Ozzy told Guitar World, "If it's goodbye, we're ending it on a high note… But I'm up for another BLACK SABBATH album and tour. If we can, great. If not, I'll just carry on doing my own thing."

BLACK SABBATH was honored with a Grammy in the "Best Hard Rock/Metal Performance" category in the pre-telecast ceremony at the 56th annual Grammy Awards on January 26 at the Staples Center in Los Angeles. BLACK SABBATH was nominated for the track "God Is Dead?", from "13". BLACK SABBATH's "God Is Dead?" also picked up a nomination in the "Best Rock Song" category. In addition, "13" earned a nod for "Best Rock Album", alongside LED ZEPPELIN's "Celebration Day" and QUEENS OF THE STONE AGE's "…Like Clockwork", among others.

Here's a snap from a presentation at Hyde Park for selling over a million copies of "13" by @BlackSabbath worldwide! pic.twitter.com/SeiAcfmN60