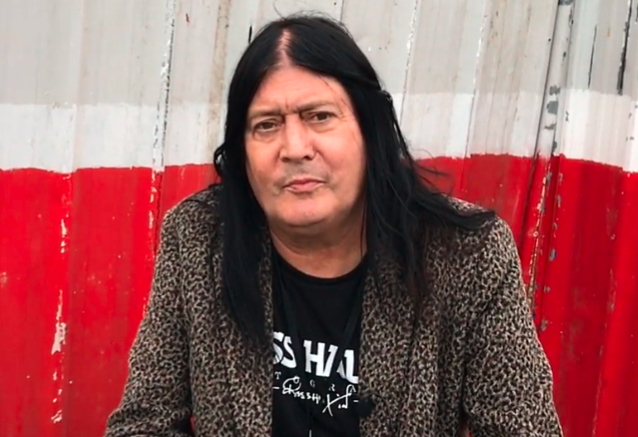 The founder of UFO, WAYSTED and, more recently, THE PETE WAY BAND died earlier today (Friday, August 14) at the age of 69. He sustained life-threatening injuries in an accident two months ago but fought hard until finally succumbing to those injuries at 11.35 a.m. BST. His wife, Jenny, was at his side.

Way was a much-loved and highly regarded figure among rock fans, critics and fellow musicians alike. Best known for his work with UFO, Pete's energetic live performances were at the heart of the band's countless world tours. His melodic bass lines underpinned the catalog of enduring rock classics upon which UFO's reputation and legacy were founded. Pete's post-UFO work included collaborating with "Fast" Eddie Clarke from MOTÖRHEAD — the two putting together FASTWAY with HUMBLE PIE drummer Jerry Shirley — and playing bass for his longtime friend Ozzy Osbourne. He then put together his own band WAYSTED. Pete's keen ear for song arrangements have also seen him serve as producer for popular hard rock acts such as TWISTED SISTER and the COCKNEY REJECTS.

"Oh my Dear Pete
You have left us.
I am so sad.
Your sweet existence has left us. I am in tears.
You were more than you...

This year keeps getting worse. Pete Way, one of the “characters” of metal and fellow @AVFCOfficial supporter has passed. He supported Deadland Ritual on the show in London. Very funny man. RIP Pete. pic.twitter.com/HtX2Iu152T

Today is a sad day. @PeteWayOfficial of UFO has passed away. He was a friend, a mentor, produced @TwistedSisterNY seminal 1st album, brought us to the gates of the metal kingdom & introduced us to Lemmy who guided us the rest of the way. Love you Pete. Miss you. You rocked.

RIP Pete Way.. Thank you for inspiring me to always give it my all as a bass player-and being so great to me every time we saw each other. You will be missed..#peteway#ufo#legend#bass#inspirationhttps://t.co/cd4yISoJL0

"I’m heartbroken at the news of the passing of our old friend #PeteWay especially coming so close to that of Paul Raymond & Paul Chapman. I’d known Pete since 1980 when I went to see
UFO & Girl play at the Sheffield City Hall & were mates ever since. RIP my friend.“ - Joe Elliott

Rest In Peace Pete Way of UFO.
UFO was a huge influence on me. Played their songs repeatedly in my teenage bands and I have a white Gibson Thunderbird bass because of this guy. He and Michel Schenker together in the classic lineup were magic. Absolutely gutted! @PeteWayOfficialhttps://t.co/ySTHSCvbG5

RIP Pete Way. one of my favorite & coolest looking bass players ever. If I played bass I would play a Thunderbird on my knees also. thanks for all those great UFO records. Pete Way may u find peace with your Lights… https://t.co/zXYsjkQQrk

Very sad to hear of the passing of Pete Way today. The "Strangers In The Night" live album is hands-down one of my all-time favorites, and for me the highlight of the UFO lineup of that day. Pete and his girlfriend actually came to see Megadeth on the Clash of the Titans tour at the Birmingham NEC Arena in 1990 where Dave Mustaine and I had a brief conversation with him just before we took the stage that evening. It's always impactful to know your heroes are in the audience for your show, the same way I was for his show with Waysted opening for Iron Maiden several years before at Irvine Meadows, CA. Pete's look, his style, and his simple but powerful bass lines were a highly influential force to my own playing. He will be dearly missed....RIP! #ufo #peteway #waysted

The news none of us ever wanted to hear.
R.I.P. Pete.

- from your friends Cheap Trick pic.twitter.com/D34JJ6qD9S

We are saddened to hear the news of our friend Pete Ways passing this morning.

Our condolences and thoughts are with Pete’s family & loved ones.

Sad to hear one of my favorite bass players, Pete Way from UFO died today. UFOs live album “Strangers in The Night” is one of the best and I’m grateful that record helped me grow up in music and as a guitar player. 1/2 pic.twitter.com/7v6dK185PL

@FTMSeattle, my UFO tribute band, has played over 17 years raising money and awareness for Camp Oasis for kids with #CrohnsAndColitis. Stone and I have had many conversations over the years of our love for UFO. Pete was essential and will be missed. RIP 2/2

RIP Pete Way. Have known Pete for years and worked with him when we were in a band together called 'Damage Control' with Robin George pic.twitter.com/sH9nTQV9Ez

Rest in Peace #peteway#UFO ufo_band_official Terrible News!! I know we All loved Him!!! My Fave Bassist in Classic Rock.. Coolist,& Raddest,Most Fashionista Bassist from the true rock days!!! Thoughts & Prayers to… https://t.co/WPlQMoiQDt

Iconic bass player, and a true rock’n’roll madman by all accounts. I can highly recommend his autobiography “A fast ride...

Rest easy Pete, whenever I was in your company you always made me laugh !!

I’m saddened to hear about the passing of Pete Way. He was a huge inspiration to Nikki Sixx, as well as many others!!!!...

Pete Way was a huge influence on me , he was uncompromising musically , and he was a great performer . He had a unique feel and wrote some of my all time fave songs . My heart goes out to all his friends and family . PETE WAY R.I.P. ! 🖤 #peteway 📸by @rosshalfin

RIP Rockstar. One of my main influences. Gotta go listen to some UFO tonight. Posted 🖤 @withregram • @rosshalfin Pete Way RIP…. It is with the greatest of sadness I post this. Of all the people I’ve known and toured with, in his day Pete was the most fun and he remained a good friend. ‘Light’s Out In London’ really says it all. #rosshalfin #peteway #ufo

So sad to hear of the passing of the legendary Pete Way. He was the prototype badass early hard rock / metal bassist who surely inspired the likes of guys like Steve Harris and @nikkisixxpixx. UFO’s Strangers In The Night remains one of my favorite live albums of all time. #RIPPeteWay @petewayofficial @ufo_rockband

Anyone who ever picked up a #bass in the #rocknrollmusic field should know what a great #bassist @petewayofficial was ! His work w UFO and Wasted was Stellar and he just looked so damn cool doing it! RIP Mr Way and thank you for showing us what being #solid #smooth & F&@[email protected]“ #cool was all about! #gibsonthunderbird #slungwaydownlow #rockbottom 👊🏼🙏🏼✅

Rest In Peace #PeteWay. One of the coolest bass players!! So many great songs, go listen to UFO’s Strangers In The Night album if you’re not familiar. One of the best live albums of all time!!! I never saw Pete with UFO, but did see him with #Waysted opening for @ironmaiden in ‘87 in #Winnipeg! I was 17. It was killer!!! We got to know each other years later. This photo was taken in 2001, very late in the evening backstage while I was touring with @thevinceneil band. Left to right: @brentwoodsguitar, Pete Way, Jamie Hunting (another one of my all time fave bass players),myself and of course Vince leaning in front! We had a blast that night. Great memories!