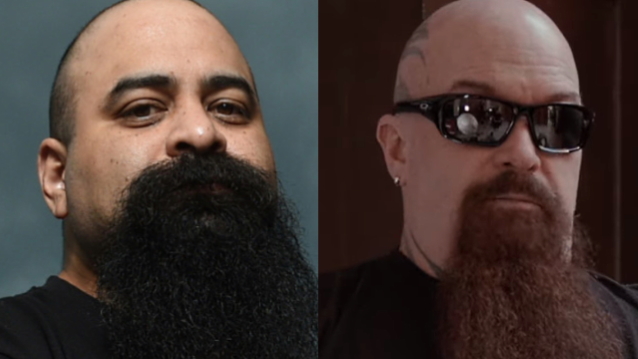 During an appearance on the latest episode of "Ned's Coffee & Quarantine", which airs on Iowa's Rock 108 radio station, STATIC-X bassist Tony Campos was asked when the last time was that he had a clean-shaven face. He responded (see video below): "As far as the beard, I think I started growing it in '97, '98, maybe. Obviously, once I hit puberty, I never had a clean-shaven face — 'cause I always had a moustache — but I shaved the moustache once. It's funny, 'cause my baby sister had never seen me without my moustache, and I think she was, like, nine or 10 when I said, 'Fuck it! Let me shave off the moustache.' And she flipped out, like, 'What the fuck? Who is this? What did you do to your face?' And it was funny, 'cause I had this white strip of untanned skin, and I was, like, 'Oh, I'm never doing this again.' [Laughs] It was literally a strip of white. And I was, like, 'Oh, man. This is dumb. I'm not doing this again.' So, yeah, no more clean-shaven face for this guy."

When host Ned told Tony that his beard has become his trademark, Campos said: "I don't know. The beard, I have to give credit or responsibility — whatever you wanna say — I've gotta that to [SLAYER's] Kerry King. He told me how to grow the beard. 'Cause before I took his advice, it wasn't like [it is right now] — it was a little smaller and a little shorter up front. Of all places, we were backstage at a QUEENSRŸCHE show — they were playing the House Of Blues in Anaheim. And we were both hanging out backstage. And he taps me on the shoulder. I was, like, 'Hey, Kerry, what's up?' He was, like, 'You're growing that wrong.' 'Really?' He was, like, 'You've gotta grow it from back here.' [points to the back of his chin] 'Cause at that point, I was only growing it from the edge of my chin. He was, like, 'No. You've gotta grow it from back here, down by your throat.' I was, like, 'Oh! Okay.' So I took his advice, and here we go. So when people say I look like Kerry King, I say it's his fault. He told me how to grow the fucking thing. So take it up with him. If he didn't want me looking like him, he wouldn't have gave me the fucking advice."