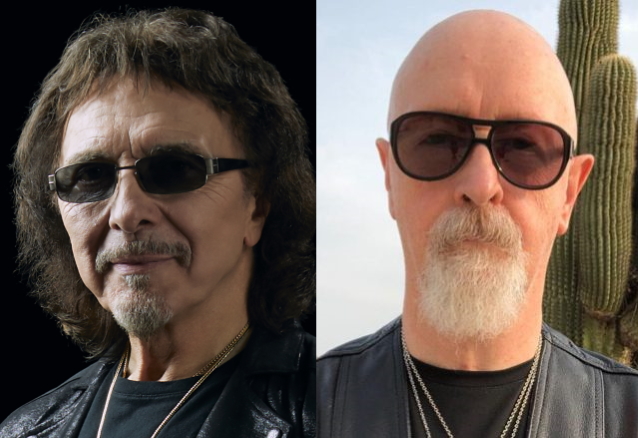 The prospect of the JUDAS PRIEST singer appearing on a HEAVEN & HELL record was first publicly raised by drummer Vinny Appice, who recently said that there was talk about HEAVEN & HELL "carrying on" with Halford after Ronnie James Dio's tragic passing in 2010. Appice told the "Rock Fantasy" Internet show that "Rob kept wanting to do it — he wanted to do it. When I saw him somewhere — at an award show — [he told me,] 'I'm gonna talk to Tony.' And then recently, I sent a message over to management about, 'Hey, we could easily do an album and not even see each other, the way things are done these days, with Rob.'"

Asked in a new interview with Loudwire if a collaboration with Halford is something that he would consider, Iommi said: "Rob must have mentioned it to Vinny at one particular time. It won't happen now, but I'm writing stuff. What I'm going to use I don't know yet — there's no rush to do anything at the moment. I want to do an album of some sort, whether its riffs or having a singer on it or for movies or whatever. I'm open for most things at the moment."

In November 1992, BLACK SABBATH played two concerts with Halford on vocals as the support act for Ozzy Osbourne on the last shows for Osbourne's "No More Tours" tour in Costa Mesa, California. Rob sang for SABBATH after Dio, who was the band's vocalist at the time, refused to take the stage.

Rob also performed with SABBATH members Iommi, Geezer Butler and Bill Ward on August 26, 2004 at the Camden, New Jersey stop of Ozzfest after Ozzy came down with an "attack of bronchitis" and was unable to take part in the concert.

Dio replaced Osbourne in BLACK SABBATH in 1980, recording the "Heaven And Hell" and "Mob Rules" albums, plus "Live Evil", before leaving in 1982. He rejoined the group 10 years later for an album called "Dehumanizer", and again teamed with the group under the HEAVEN & HELL banner in 2006. HEAVEN & HELL released an album called "The Devil You Know" in 2009.