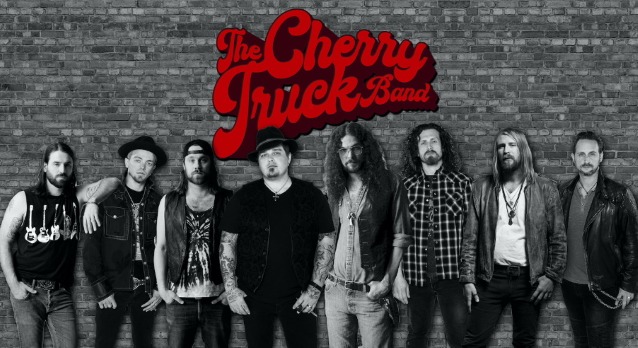 Back in mid-May, as the COVID-19 pandemic was spreading throughout the world and as many of us were deep in lockdown, Kentucky rockers BLACK STONE CHERRY and Canadian hard-rocking juggernauts MONSTER TRUCK decided that distance wasn't going to stop them from creating something beautiful for a good cause.

Following BLACK STONE CHERRY's YouTube series the "Cherry Chats", the two bands joined forces over a series of live Zoom video calls to write a song from scratch, allowing fans unprecedented access to watch as the creativity unfolded from the safety of their homes. Thus, THE CHERRY TRUCK BAND was born, and out of those sessions came a special charity single "Love Become Law".

All proceeds from this single will be split between two charities, chosen by the bands themselves — BLACK STONE CHERRY will be donating its proceeds to The Boys And Girls Club Of America and MONSTER TRUCK to Black Lives Matter. You can purchase the song here.

Talking about how the song came together, BLACK STONE CHERRY said: "The idea of THE CHERRY TRUCK BAND can honestly be credited to the pandemic that our world is in. We saw tour after tour being cancelled and so many bands were turning to live streaming performances online. We put our heads together with our great friends in MONSTER TRUCK and decided to do something we hadn't seen any other bands do to help pass the time while still entertaining fans. That idea was to write a song, LIVE to the world and divide it up into segments to show our fans the process of writing and creating. We had never done this with another full band before, let alone while we're live streaming. It was incredibly exciting and fun and we are so proud of the song and more importantly, its meaning! This song is about uniting, being and living as one, and most importantly, loving each and every person that walks this planet. We hope you enjoy it as much as we did creating it for you!"

MONSTER TRUCK's frontman/bassist Jon "Marv" Harvey added: "THE CHERRY TRUCK BAND started with a bunch of friends getting together over long distances to create something memorable, meaningful and joyous. Over the five weekly episodes, our entire world basically turned upside down. The people were rising up. The people were tired of being oppressed. The people were tired of suffering for doing nothing wrong. The people were ready to force change. This is our anthem in solidarity to those fighting for basic rights. This is our voices saying, 'we love you, we hear you, we respect and love you.' Black lives matter. Without the impact of black culture, there would be no modern music, period. Respect, protect and celebrate diversity. Our world depends on it."

MONSTER TRUCK will be donating to Black Lives Matter Foundation, Inc., a global organization in the U.S., U.K. and Canada, whose mission is to eradicate white supremacy and build local power to intervene in violence inflicted on black communities by the state and vigilantes. By combating and countering acts of violence, creating space for black imagination and innovation, and centering black joy, we are winning immediate improvements in our lives.