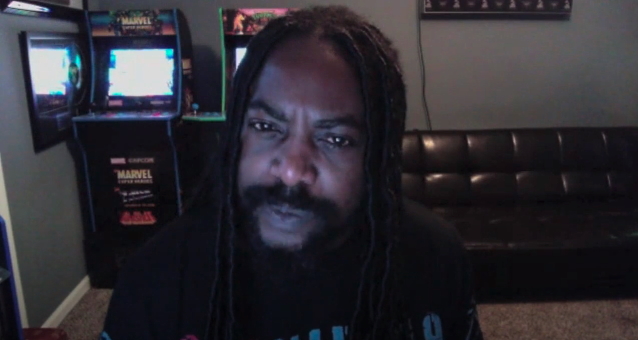 SEVENDUST singer Lajon Witherspoon spoke to Terrie Carr of the Morristown, New Jersey radio station 105.5 WDHA about the band's decision to cover the SOUNDGARDEN classic "The Day I Tried To Live". The song, which arrived last month, is the first piece of new music from SEVENDUST since 2018's critically acclaimed "All I See Is War" album. The band chose the track to return to the airwaves with after seeing the societal changes happening around the globe. The lyrical message of learning to live a better life is as relevant today as they were when the song was first released in 1994.

Said Witherspoon (see video below): "This [upcoming SEVENDUST] album, we were talking as a band and everyone together, and we said, 'Maybe we should do a cover. What cover should we do?' So, of course, there was a million [suggestions]. We all laughed and said, 'No way are we gonna do that. No way.' It got down to the line, and Elvis [Michael Baskette], our producer, [whom] we love, and, obviously his team is incredible, came up with the idea. And, of course, I didn't get sleep for a solid week, thinking, 'How in the world will I be able to compare to such an incredible singer, band, history?' How do you do that the proper way? How do you do it to where people think it's authentic and people understand it? And so I just went into the studio. And, believe me, it was the last song that I sang on this album."

He continued: "I'll tell you what — the energy… I've got chills right now talking about it. It was very magical to do. And I feel like I put my heart and all my energy into it, just like I do with anything with SEVENDUST. But this was very special. And it's led up to now, where we're still kind of waiting to see when the album is gonna come out. But this, we felt, was a great thing to put out, because it seems like this song fits with what's going on in the world today, and it's so ironic that it does."

SEVENDUST is known for its high-energy live shows, and even though the COVID-19 crisis has stalled most touring globally, the band has an Australian run booked for February 2021.

"All I See Is War" was released in May 2018. It marked the group's first album for Rise Records, the Oregon-based metal and hard rock label which was purchased by BMG in 2015.

SEVENDUST released four singles and videos from "All I See Is War": "Dirty", "Not Original", "Medicated" and "Risen".

In 2016, SEVENDUST received its first-ever Grammy nomination after two decades together as a band. "Thank You", the debut single from 2015's "Kill The Flaw", got the nod for "Best Metal Performance".