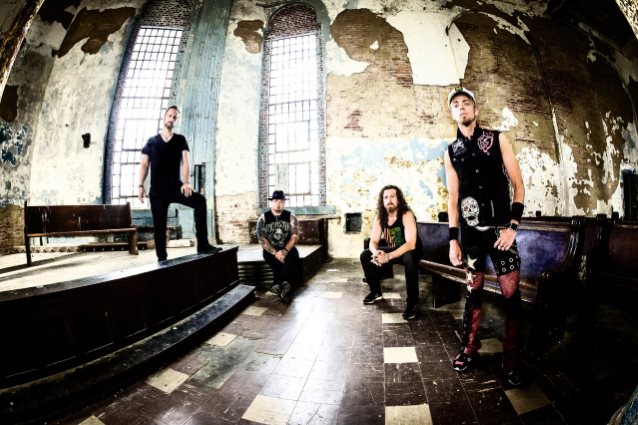 Drummer John Fred Young and bassist Jon Lawhon of the Kentucky rockers BLACK STONE CHERRY were recently interviewed by Ticketmaster UK. The full conversation can be viewed below. A few excerpts follow (as transcribed by BLABBERMOUTH.NET):

Jon: "This was a very self-done, in-house record. I've been doing artwork for our band for a long while now, but this is the first time that we had one of our members mix. Our singer, Chris [Robertson], actually got to mix the record. He did a phenomenal job with it. We wanted to know we were making the right decision, so he did some spec mix stuff, and Chris's mix, he could really achieve what we are. It helps that he's in the band. I think that was one of the biggest reasons why his mix won, because it's not a heavy guitar record; it's not a heavy drums record or heavy bass record. You can hear everything. It's very well mixed. Everything kind of has its moment and sticks out in its own regard, which has always been what we are. We're not a band that there's, like, one or two guys that are the focal points of the band, and then the other guys [are] in the background. That's not us. We're a very equal and unified force. In this mix, the mix that Chris delivered, we really nailed that."

John: "We're excited. It's a great album. I think every album you release is like, 'This is our greatest album! This is the heaviest and the best!' It's really neat. We had a great time recording it."

Jon: "That's exactly what the headline's going to say — 'It's really neat.' [Laughs]"

Jon: "Honestly, it's taking the walls down for us. It's more of a discovery of who we are and who we've always been and intended to be, and just never really truly, 100 percent wrapped ourselves around it until now. During the cycle of the last album, we talked a lot about Kentucky and where we're from and heritage, and all that stuff. 'Family Tree', it kind of lends itself to the same, like, scope and idea. Everybody knows that we've always been a very rooted band."

On the influence of Young's father, Fred, the drummer of southern/country rockers THE KENTUCKY HEADHUNTERS:

John: "My dad and my uncle let us take over their house that my great-grandmother gave them when they were teenagers to play music in. We grew up basically every day after school, we'd go there and practice until 10 or 11 o'clock at night, and drag into school the next day. We were very fortunate to have such a cool atmosphere to grow up in and make music, and that's what's carved us out, I think, [and] makes our sound a little different. Definitely on this record, you can tell a lot of those influences [are] really coming to the surface."

Jon: "The biggest thing is, we want white light on the band so the whole band is seen. We're not big fans of the big spots, unless there's four of them, because we want to make sure everybody is very well-lit."

On the group's upcoming performance at this summer's Download festival, where they will play immediately before GUNS N' ROSES:

Jon: "[We're] absolutely stoked to have that slot. I don't know how we pulled it off — a whole lot of politics, I guess, on our booking agent. [Laughs]"

John: "Honestly, it's an honor to get to play Download in the first place. Our first show was in 2007, and I remember we were walking up on the sides of the stage and we were like, 'Man, there's so many people out here.' Getting to do it over the years and headlining the second stage, it's awesome, and now, getting to play before GUNS N' ROSES, it's going to be one hell of a rock n' roll show. It's going to be great. I'm nervous talking about it right now."

Jon: "We'll be ready to throw up backstage before we go on, I'm sure."

"Family Tree" will be released on April 20 via Mascot Records/Mascot Label Group.