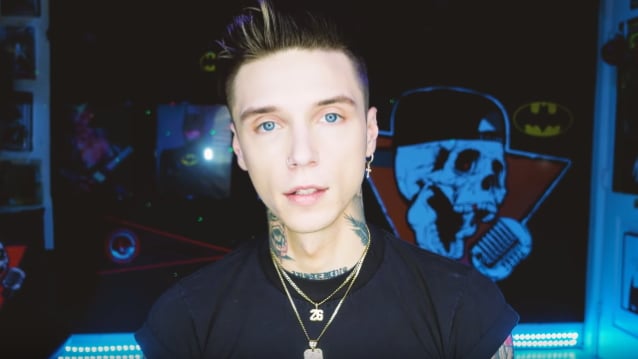 During an appearance on MACHINE HEAD frontman Robb Flynn's "No Fuckin' Regrets With Robb Flynn" podcast, BLACK VEIL BRIDES singer Andy Biersack spoke about his decision to get sober more than six years ago. He said (as transcribed by BLABBERMOUTH.NET): "It was just one of those situations where I was so young. All I wanted in the world was to be in a rock band and to go on tour and to get to do this thing that I had this dream to do. I didn't really socialize much growing up. Basically, my childhood was I'd play sports and then I'd come home and I'd paint my face and I'd sing into the mirror and then I'd go to hockey practice or whatever and then I'd come back and paint my face and sing into a mirror and dream of drawing and making costumes. So because of that, there wasn't really much time for friends; I was just kind of a loner kid. And I never really built friendships; I didn't know how to act around other people. And then I'm touring regionally in a car, things are happening and we go play a basement to five people. Well, that's five more people than I thought were gonna be there, and they all say, 'Hey, you're the shit.' And I'm, like, 'Oh, that's awesome. I am the shit. And you're 22; you must know everything about the world.' And so as it happened, being so young and then heading into a career in music, I started kind of piecing together a personality based on these other people that I was around. And everybody in the bands were older than me, and everywhere we'd go on tour were older than me, and I just saw them as they know what their life is; this is what you do. You've gotta party hard, you've gotta be crazy and you've gotta cultivate this personality. And it just became by the time I'm 21, 22, I've just got this weird suit of armor that I've made of this thing that I've read somebody say in an interview and this aesthetic choice that somebody made and all this stuff that I'm kind of taking and making it into whatever my thing is. And by the time I hit my mid-20s, I was just kind of over it."

He continued: "I'd spent so much time trying to be this character that I had created in my mind and trying to portray this thing. We've gotten so much shit from the day that we started from so many people and it made me so mad and angry and I wanted to defend myself and defend my band. And more importantly, as a kid who came from a small town of modest means, who just wanted to be around other people who liked the same shit as me, I felt this sense of responsibility to our audience to be the guy who will stand up for them and fight against people that talk shit about the band. And I still do, but the way that I was doing it at that age was I'd get really drunk and we'd play three songs and I'd spend the rest of the show trying to fight people. It wasn't necessarily healthy. And then I would feel down and so I'd go to a hotel room and drink by myself and then try to write songs and just spinning out. And it just got to the point where I didn't have an addiction so much as it was just a crutch. It was, 'I'm doing this because I'm socially awkward and don't know who I am and this gives me a personality and makes me feel better about being outgoing and being this person that I wanna be.' And then it became, 'Well, I have to do that.' And then we'd make records. The first major label record we made, the producer told me that I sounded better when I was drinking. So, I'm 20 years old, not even legally allowed to drink, and I'm being told by an A-list producer on my first major label record, 'You sound better when you're drunk, so you should get drunk before we track vocals.' So then I'm, like, 'Well, I've gotta do this.' And so it just became this kind of self-fulfilling thing. And then my wife [Juliet Simms, a.k.a. Lilith Czar] is also a musician and she is somebody who had dealt with similar things. She started really young and had a very similar trajectory in terms of her life, and we both were just, like, 'We've just gotta cut this shit out,' and we just did it together. And now it's been the same amount of time for both of us, and we're exponentially happier and healthier people than we've ever been."