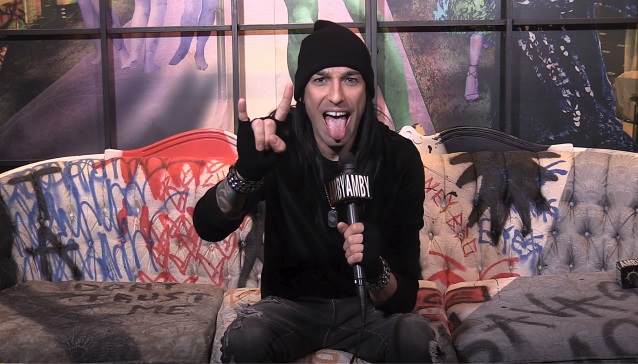 BLACK VEIL BRIDES Drummer On Meeting Crying Fans: 'It's Incredible To Have That Kind Of Power'

A Music Blog, Yea? conducted an interview with drummer Christian "CC" Coma of Los Angeles rockers BLACK VEIL BRIDES prior to the band's February 5 concert at REBEL in Toronto, Ontario, Canada, where they were co-headlining with ASKING ALEXANDRIA. You can watch the entire chat below. A few excerpts follow (transcribed by BLABBERMOUTH.NET).

On how BLACK VEIL BRIDES handle fans who cry during meet-and-greets:

Christian: "I don't know…I think it used to happen a lot more than it does now. It still happens, even yesterday, someone was shaking and freaking out. For me, it's incredible to have that kind of power. I started playing drums when I was a kid at 10. I never thought, 'I'm going to have this effect on somebody.' To be in the position of influence and to cause that kind of reaction in somebody just by creating my art and the guys doing whatever they do, it's kind of awesome. It's overwhelming and it's humbling; it's cool. When I see stuff like that, I kind of put myself in that position, when I was growing up with bands like GREEN DAY, KORN and SLIPKNOT, like if I was hanging out with the SLIPKNOT dudes in the early 2000s, I don't know if I'd have the same thing as starting to cry. I don't really get starstruck or anything, but I'd definitely have nerves and my heart would be pounding and stuff. I imagine myself in there and try to make it as easygoing for them as possible."

On whether he gets "starstruck" around musicians he admires:

Christian: "Not really. I mean, there's been an occasional, 'Holy shit! That's them!' Like that, but I'm not freaking out or having a lack of words or anything like that. Not that I think I'm, like, 'too cool for school,' it's just like we're all human. We all have a skeleton underneath our skin and despite people's talents and creative brilliance and intelligence, we all come from the same species. That's kind of how I think of it. We're all on the same level."

On whether the message of individuality found within BLACK VEIL BRIDES' lyrics is a new pursuit for the band:

Christian: "No, we always have [had it]. The majority of the fanbase, they really resonate with the lyrics and having self-empowerment and this collective group. It's like a home at our shows and there's so many outcasts. There's so many different ways we say it and convey that point throughout our albums and stuff. But it really is. I see tagged photos of fans on Instagram and they make life-long friendships from our shows. They'll just be standing next to somebody at a concert and now they have meet-ups all over the world. Mexico City has a bunch of them, South America, they'll just go to a park and there's 40 people hanging out with banners and stuff. It's kind of like awesome; it's amazing to watch, but the fact they resonate with the message, I think that adds to it. They have some camaraderie with the fanbase because they were outcasts or whatever, trials and tribulations they're going through in their life that resonate with the 'Be well, be strong' mentality."

On whether there are any phases of BLACK VEIL BRIDES that he's embarrassed about:

Christian: "First, it's why did I do all of that stuff? When we had the makeup, I would do this acrylic paint all over my whole torso from my fingertips all the way up to my neck, but I wouldn't get my back so it would look weird from the back. It stopped from the sides. It would be like a fence that's all over here [points to chest]. I look at it now and go, 'God, that was such a disgusting period in my life.' There would be paint chips in my bunk and it would chip off. I would have to go like this [makes sweeping motion]. It was so gross. It would come right off with water, but we didn't get to shower everyday because we were touring extensively back then. It was kind of gross. Half of the time the paint was sweating off…looking back on that, I'm kind of disgusted with myself."

BLACK VEIL BRIDES' fifth album, "Vale", was released January 12 via Lava/Universal Republic. The follow-up to the band's 2014 self-titled effort was produced by John Feldmann at his Southern California studio.