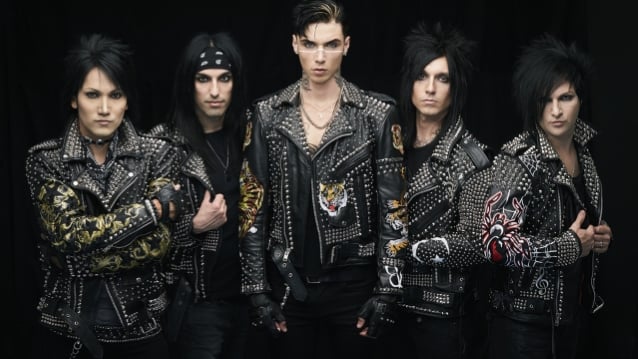 BLACK VEIL BRIDES' Reimagining Of Debut Album, 'We Stitch These Wounds', To Include New Song

California rockers BLACK VEIL BRIDES will celebrate the tenth anniversary of their debut album, "We Stitch These Wounds", next year by releasing a re-recorded version of the LP, along with some new songs.

"We Stitch These Wounds" was issued in July 2010 via StandBy Records and was BLACK VEIL BRIDES' only studio album to feature drummer Sandra Alvarenga before she left the band and joined MODERN DAY ESCAPE.

Guitarist Jeremy "Jinxx" Ferguson told Myglobalmind about BLACK VEIL BRIDES' plan to re-record the LP: "[The original album] was recorded ten years ago, and we didn't have a large budget to do it properly. We had to call in some favors just to get it completed. This time, we will produce it ourselves and have it match to what we sound like now. It should be a lot of fun to remake that CD; then it will be released for the 10th anniversary. We are planning to add a new studio song on it as well to tease the fans on what they can expect from the next studio CD."

Asked if he feels "We Stitch These Wounds" was overlooked by fans, Jinxx said: "The songs are there; the production value was not. It was unfortunate at the time, but we did what we could do. It would be nice to hear them re-recorded in their full glory."

According to Jinxx, the material on the new version of "We Stitch These Wounds" "will be authentic as to how it was written. What you find over time when playing songs live is your playing styles changes," he explained. "We don't want to change the song too much, as people are familiar with it. We call it 'demoitis' — you record something as a demo, and everyone gets so used to that version; then you do it properly in the studio, and everyone starts to say it's not the same as the demo. [Laughs] I think that happened with 'Knives And Pens'. When fans heard the demo on YouTube and then we went into the studio to record it, some fans were saying that we ruined it. [Laughs] I don't want to say too much, as we are not there yet… We will play all the parts with better tone and production. I believe it will be true to the original with all the same notes."

Jinxx said that the re-recorded version of "We Stitch These Wounds" will come with a "a lot of extra goodies. We are going into the studio this fall to knock it, and we are really excited about it," he said. "We have been going over all the songs with a fine-tooth comb. Some of them we played on the road, while others haven't been touched for ten years. We will be reliving the experience we had when we initially recorded this CD."

BLACK VEIL BRIDES fans can also expect the band to hit the road in support of the new "We Stitch These Wounds". "It's been talked about, and I can definitely see it happening in 2020," Jinxx said.