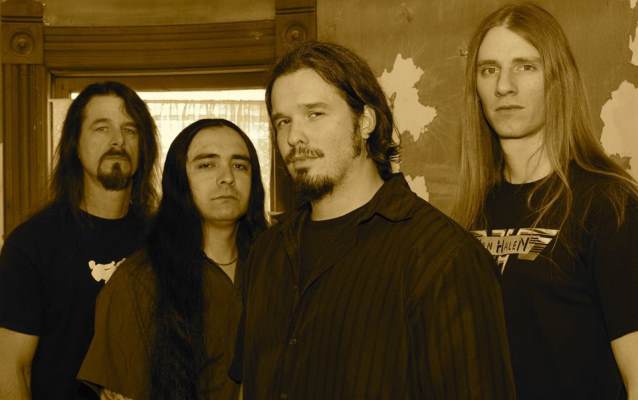 "Burn Eternal", a demo track from BLACKGATES — the East San Francisco Bay Area/New York metal outfit featuring former ANTHRAX singer Dan Nelson, drummer Paul Bostaph (SLAYER, ex-TESTAMENT, EXODUS, FORBIDDEN) and guitarist Jeremy Epp (THE VENTING MACHINE) — can be streamed in the YouTube clip below. The song was recorded in the BLACKGATES rehearsal room in 2012 and was mixed earlier this year.

In an October 2013 interview with Greece's Metal Kaoz, Bostaph was asked if he has any other projects going on besides his current full-time gig with SLAYER. "I still have my other band, BLACKGATES," he replied. "And we're talking about… I mean, I haven't had any time. SLAYER is main priority, but if I have some free time, I'm gonna try to do a five- or six-song EP with BLACKGATES. We have our original singer back, Dan Nelson, so we're really happy about that. I just need some time to get together with my guitar player, Jeremy Epp, and we're gonna put the material together and try to get something out. We've put, like… Jeremy and I and Dan Nelson have put, like, over four years into the material we have, so I think we just wanna put it out there. And just move on with SLAYER. And if I can do some stuff with BLACKGATES, I will, and if I can't, then at least we've put the music out there."

BLACKGATES made its live debut on May 5, 2012 at Rooster's Roadhouse in Alameda, California as part of the Cinco De Mayo Metal Throwdown.

BLACKGATES in 2012 parted ways with bassist Uriah Duffy (ex-WHITESNAKE) and replaced him with Luis Barillas (THE VENTING MACHINE).

Nelson, who was in ANTHRAX for nearly two years — from late 2007 until July 2009 — filed a lawsuit in November 2011 claiming that Charlie Benante (drums),Frank Bello (bass) and Scott Ian (guitar) falsely stated in "numerous interviews" that he had "abruptly resigned" after getting sick, forcing a cancelation of a tour. The $2.65-million suit also alleged that Benante told BLABBERMOUTH.NET that Nelson "was a bully."