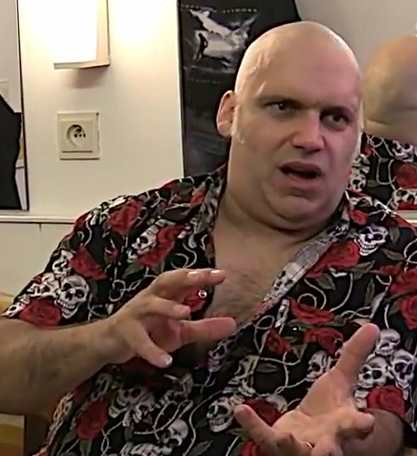 Radio Metal: [Your] new [solo] album, "The King Of Metal", is the first since you [parted ways] with Jay Walsh and David and Nico Bermudez. How did that change the writing process? How was this record written?

Blaze Bayley: I found a new guitar player. I write most of the song and then we talk about it. It's the same with Claudio Tiricanti; [he] is my drummer for this record. So regarding the writing process, what we did is a totally different approach. I wanted to do something very simple and very direct, particularly lyrically, I wanted to be able to talk to my fans whose first language isn't English, so it has to be a very clear and direct message. When I started the writing [process for the new CD], I wanted to be able to be on the stage, on the tour, and say specific words in a specific way, directly, to my fans, so that's what I've done.

Blaze Bayley: Yeah, I think that if you look at the different genres of music, pop fans are more fashion-orientated, so maybe they will like one Madonna record, but not all Madonna records. Every artist has a certain number of true fans, but the heavy metal fans are special. If they like an artist and liked a CD, then for the next CD, they won't wait for the reviews, but just find out when it comes out and get it, because if they're fan of the artist, then they love everything. On everything that I ever recorded, I feel that that loyalty has meant a lot to me. I have a few fans… You know, I'm a very small, underground heavy metal singer, a lot of fans from the IRON MAIDEN days have heard of me, but not a lot of them know what I do with my own music, or a very few. So I'm just a small, underground artist doing things my own way and I have support from a few fans around the world and that keeps me going. And I'm very proud and very honored to have that support, truly.

Radio Metal: There is a song [on the new album] called "Dimebag" that's dedicated to [late PANTERA guitarist] Dimebag Darrell. Why did you choose to dedicate a song to Dimebag eight years after his death? Why now?

Blaze Bayley: There's a few reasons, and the first one is purely artistic. I had the basic idea a few weeks after he died and I was working with different musicians at the time, and it just didn't come together. We tried it a few times, but we never had the chance to finish the song, so I just kept the idea because I thought it was good. I really believed in this idea, and I've tried it with all the musicians I've worked with and it never ever worked, it was never appropriate, it never fitted with what else we were doing. So for this album, I was like, "OK, let's give a try on that idea, I'm gonna start with that." It was one of the first things we started to work on when I started working with Thomas [Zwijsen] on the writing and the songs generally, and it got together really well. And then when we got to the pre-production we had all the bass and all the drums going and it really started to take shape, and that was it. I had the core of the song and I'm really pleased with the way it turned out. So because of certain reasons it's accidental, but it's something that I really like: no one can say that I'm on the bargain trying to make something that have been done, because it is so far after his death, you can't say that I put this song on my album so PANTERA fans will buy it. It's something that PANTERA fans won't think about, if you see in the general press it's not mentioned a lot at all, so in that way, people will see this so far after and see it's a genuine tribute to the man, and also a warning of the terrible things that can happen. Of all the death in music, it is the one that I respect the most for the way he lived. He never had a choice about how he died. I think people are glorified when they drink themselves to death or die of a drug overdose, and for me that's just not good. Dimebag didn't kill himself, he didn't do anything at all to bring on his own death. His life was taken from him. I think that's why he's more worth remembered, and because of the great work he might have done. He wasn't like the people who'd drink themselves to death and so on.

Radio Metal: Last year you split up with David Bermudez, Nico Bermudez and Jay Walsh and released a statement about it. A few days later, they released a statement saying that yours wasn't true and that they were fired only for financial reasons. How did you react to their statement? Where is the truth?

Blaze Bayley: There is no truth, there is only personal, subjective view of your situation and your reality. There is no truth. There is how do you feel about a situation, and how you feel you've been treated. I just wanted to kill myself on that tour; the pressure to keep a band together was too much. Sometimes I really wished I had killed myself to escape, but my wife talked me out of it, and she persuaded me to carry on, and that's why I'm still here. So they can say what they want, but my truth is: being with those people on that tour in that situation made me feel like killing myself, like ending my life, ending everything, leaving my wife and my son just to get away from everything. That's my truth.

Radio Metal: A few weeks ago, you sang in Russia with Paul Di'Anno, who also was a member of IRON MAIDEN like you. What can you tell us about this experience?

Blaze Bayley: It was fantastic, so much fun, it was just great. The weather was horrible in Moscow, it was snowing, and it was really cold, but Paul is a really funny guy, and the Russian band that played with us was absolutely excellent and did a wonderful job. They made my songs sound really good and they were great guys to work with. Because of the two names, people who didn't know me came to see Paul and me, and I made a lot of new fans, so that's something I really enjoyed, something that I [thought] of doing before, but that seemed to be the right time to do it, the right state of mind. I don't have a band now, I'm a solo artist and I choose different musicians, but this was the right time to do this, and it was great. I really enjoyed it, it was so much fun. And I got paid, which is really great. So I think we're gonna do some more, we've got Australia coming up in November, and then I think we're gonna do a few more dates together in Eastern Europe, in the end of October/early November. I'm really looking forward to that, it's something that works well. I do a few of my own songs, then a few of the songs I'm known for in IRON MAIDEN, and the fans seems to really enjoy that set-list we did, so I'm open to do a few more of those. It's a lot of fun. One thing I think about music is that you should do it because you enjoy it first, not because you expect to get anywhere. If you get anywhere, then that's great because you're doing something you enjoy. That was really good and that really gave me a boost and gave me a lot of confidence to get back out there. That's really good.

Radio Metal: That's cool. Did you ever consider making an album together?

Blaze Bayley: No, because I don't see what the value would be musically. If Paul and I had some incredible idea of some new kind of British metal, or a new kind of heavy metal that would take two voices to sing, then perhaps, but at the moment, no. Now I'm very busy making my own music, and Paul is also very busy — he owns a club in Brazil and two shops and he works all the time in different countries all around the world. So no, we haven't thought about that;, I don't see where the value would be. I wouldn't say never, but I can't see who would be interested in that album.

Radio Metal: By the way, when we saw pictures of that concert there was a running gag about you two having lost your hair. Does that mean playing with IRON MAIDEN makes you lose your hair?

Blaze Bayley: Yes! If you leave IRON MAIDEN, you leave your hair.