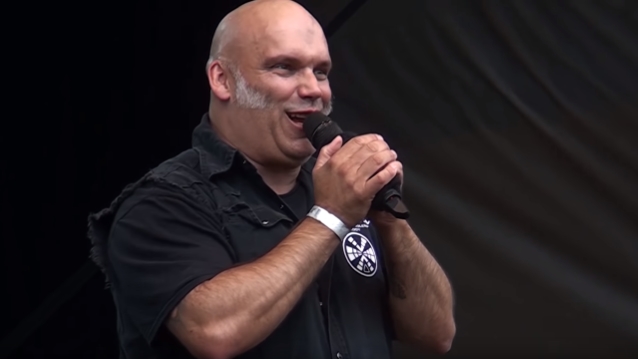 BLAZE BAYLEY: 'I Was Very Sad To Leave' IRON MAIDEN, But 'It Was The Only Way' They Could Move On

British heavy metal vocalist Blaze Bayley, who fronted IRON MAIDEN from 1994 until 1999, will play a special MAIDEN setlist at select festivals this spring and summer. Choosing songs from his era with the band, these shows will celebrate 25 years since Blaze joined IRON MAIDEN. This will be the first and last opportunity to see such a setlist.

Blaze told Ireland's Overdrive about his decision to play a handful of shows that focus on his MAIDEN material: "This is indeed the 25th anniversary of my time in IRON MAIDEN and I noticed that there are people out there that either didn't know that I was in IRON MAIDEN or perhaps they don't know what I've been doing since I was in IRON MAIDEN. This got me thinking that we should do something special this year, and we've included a bunch of songs in tour live set from my time in in the band. Since rehearsing the tracks, I've discovered that I've found another part of my voice and it's stronger than ever. I can do more with the MAIDEN songs now than I was every able to do when I was in the band.

"It's been really great working on these songs again," he continued. "To go back and revisit them again has been so interesting for me, especially since my voice has matured so much."

According to Blaze, the setlist at the upcoming shows will consist of his favorites from the two MAIDEN albums he sang on, 1995's "The X Factor" and 1998's "Virtual XI". "I'm doing it more in the style that we did back then," he said. "I've got an extra guitarist, Luke Appleton [ICED EARTH] and it's just one voice. We'll be playing the best that we can, and hopefully the fans will enjoy the set, even if they never heard me during my time in IRON MAIDEN. The songs are still very strong and stand up as a very important part of my legacy as well, so it's really exciting and I can't wait to get out there and start playing live again."

Asked if he looks back on his time with MAIDEN with fond memories, Blaze said: "Well, it was a fantastic time in my life. When I was in WOLFSBANE, we were so restricted. We were never able to tour like we wanted to. The record label wouldn't support us and all we really wanted to do was get in a van and tour relentlessly and we never got to do that. When I joined IRON MAIDEN and had a tour of nine months ahead of me, that was just a dream come true.

"The thing that I cherished the most from from my time in IRON MAIDEN was the experience of writing with them," he said. "Here I was, sitting down with artists who have been rewarded multi-platinum awards for their sales and who have written songs that are part of rock and metal culture that the world knows. It was very important to me and I learned so much over the course of the two albums.

"Did you know that there wasn't anything written for 'The X Factor' when I joined the band, and I contributed a great deal of ideas to that album?" he added. "One of my ideas was selected to be the first single from the album, 'Man On The Edge', and it was as Top 10 hit.

"Overall it was an incredible accomplishment in my career and learned so much, especially from turning ideas in my head into an actual piece of music. Overall, it was a fantastic experience for me, and I was very sad to leave. It was the only way MAIDEN could move on, and, to be honest, the world needs IRON MAIDEN. Those guys do what they want and that's the way it should be.

"I remember Steve [Harris, IRON MAIDEN bassist] telling me: "The record label are not allowed to come into the studio when we're recording. No one is allowed to listen to the album until it's finished. No one has anything to do with the album apart from the band.'

"If you want to hear real music created by real musicians, then leave them alone and try to influence the creative process with a corporate 'sales' angle."

Backing Blaze at these shows will be his regular touring and recording outfit taken from the British band ABSOLVA, plus ICED EARTH bassist and ABSOLVA guitarist Luke Appleton.

An additional celebration of the anniversary is a re-interpretation of "The X Factor" album cover art done by the very talented Akirant Illustration to help promote these shows and on a special run of T-shirts.