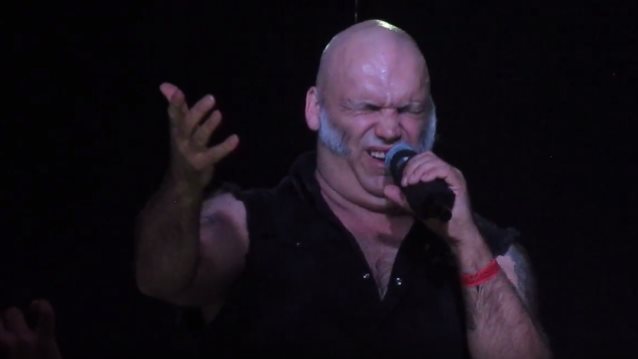 Jay Nanda of AXS.com conducted an interview with Blaze Bayley prior to the former IRON MAIDEN vocalist's September 2 concert at The Rock Box in San Antonio, Texas. You can watch the chat in two parts below. A few excerpts follow (transcribed by BLABBERMOUTH.NET).

On his new "Endure And Survive" album, the second part of the "Infinite Entanglement" trilogy:

Blaze: "The trilogy starts last year with 'Infinite Entanglement', which is the story of someone being selected for a mission to go right across the galaxy to a new earth-like planet discovered by telescope. He discovers that he's not actually in a tight-fitting spacesuit, but his consciousness has been downloaded into a machine body. He only discovers that when he's on the mission. Then he has to decide, 'Well, I think like a human. I feel like a human, but I have no flesh and blood. Am I human?' And, it's a question of identity and going to a new place with no regrets and no past, but leaving behind everything that you know and consider to be home and knowing it's a one-way journey. On part two, 'Endure And Survive', it is the end of this mission. It takes a thousand years to get to the new earth-like planet; there is no faster-than-light travel, so he has to 'endure' this journey of a thousand years. As he gets close to the planet, he starts to realize that he was never meant to get there. The ship's computer and the ship itself are programmed to get rid of him, to throw him out into space, to treat him like a piece of junk. Now, his mission is accomplished, his DNA is never supposed to reach that point. And that is the 'survival' part. He has to survive this attempt on his life, the attempt to obliterate him, to destroy him. That's why it's 'Endure And Survive'. This second album is much darker, but it also has songs like 'Fight Back', which is about out of sheer spite, not giving in. You know they want to get rid of you and you're just hanging on for sheer spite. 'Dawn Of The Dead Son' is about coming back from it, making a decision in your own mind that you will not let go. That you will not give up, no matter what, as the drowning man, you refuse to drown. That's what it's about. There are many of these subjects on the album and it's much darker. So far, live, everywhere we've played in the U.S., we've played a lot of new songs from the 'Endure And Survive' album and from 'Infinite Entanglement' and fans have gotten really into it. They've gone down really well and the album is doing well."

On his band WOLFSBANE opening for IRON MAIDEN in the early '90s:

Blaze: "We did in the U.K. There were thirty sold-out shows. Thirty-three sold-out shows. It was the last tour that MAIDEN did ever of small venues in the U.K. We were lucky enough to get the opening slot on that. It was WOLFSBANE, IRON MAIDEN, it just worked out great. The album that we did that tour with is called 'All Hell's Breaking Loose Down At Little Kathy Wilson's Place'. I met all the guys. I was invited to join the soccer team of IRON MAIDEN. To this day, it still perhaps is the best tour that I ever did was supporting IRON MAIDEN, even better than being in IRON MAIDEN because there's a lot less pressure when you're the support band. You've got forty-five minutes max and that's it. You don't have the responsibility of the whole crowd or anything. When you're actually in IRON MAIDEN, you are playing for England in the World Cup and you have to win. That's what the gig is like. It's the top professional gig in my field of music that you could possibly get."

On whether WOLFSBANE's support tour of MAIDEN helped pave the way for him eventually joining the band in 1994:

Blaze: "Yeah, I think it did. I was one of the very few singers that didn't have to send in a tape because they already had my record from WOLFSBANE from the tour. I think that was the only difference I had, I think, really, everything else is just the same. I auditioned like anybody else, they tried my voice in the studio, just like everybody else. I had to learn the same songs like everybody else. There were no favors after that. I think the advantage I had, if I had any, was that I didn't have to send in a tape or CD."

Blaze: "It was a lot of fun and I've got great memories of the time in IRON MAIDEN. I suppose the most important thing for me out of the whole experience is that I learned so much from [bassist/founding member] Steve Harris. He's a genius, I consider as a songwriter. Some of the things that he's come up with are absolutely iconic and legendary in metal that we love so much and in music, generally, I think. He's worked and the songs that he's written and the music he's written is fantastic. To work alongside and have him as a kind of a 'mentor' working on songs with him was an incredible experience, so that's really what I take away. I've played to hundreds of thousands of people during that tour on big stages and did fantastic tours and lived my dream of being a singer, but in the end, when I boil it down, the thing that is most important is what I learned while I was in the band. That actually shaped my voice, it shaped my style for my own music. So as I came to do my own album, 'Silicon Messiah', after IRON MAIDEN, it was filled with the lessons that I learned and some of the ideas that I hoped to work on the third album. 'Stare At The Sun', and 'Born As A Stranger' and 'The Launch' were all ideas I hoped to work with the band on."

"Endure And Survive" is accompanied by a world tour totaling more than a hundred shows. Throughout the trek, Blaze is being backed by his main recording and touring musicians, picked from British metal band ABSOLVA: Chris Appleton (guitar, backing vocals),Martin McNee (drums),Karl Schramm (bass, backing vocals).