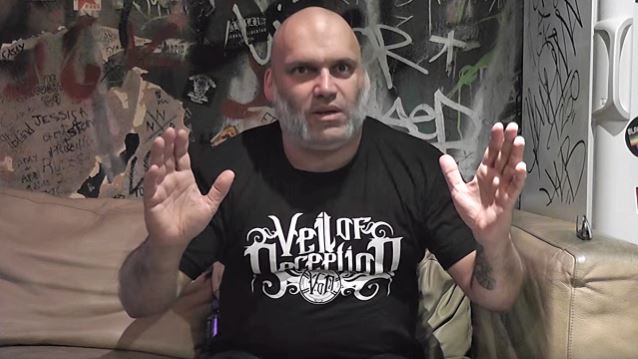 Ex-IRON MAIDEN singer Blaze Bayley has told Metal Talk that he would love to stage a special MAIDEN concert where he would get to perform with the current lineup of the band alongside fellow former MAIDEN frontman Paul Di'Anno.

"What I really want to happen — and a lot of fans ask me about this — is a MAIDEN gig, like a one-off, where it's the three singers [all going up on stage]," he said (see video below). "It's never gonna happen in a million years, but all the fans I speak to about it go, 'Yeah!' And, man, can you imagine the arguments in the pub: 'Oh, Paul's the best' 'Oh, it's Bruce [Dickinson].' 'Oh, it's Blaze.' [Laughs]"

Bayley also spoke about how his addition to MAIDEN in 1994 came at a time when all heavy metal bands were facing an uncertain future due to the commercial peak of grunge. "People weren't dressing up to go on stage, they were looking at their shoes, and it was okay to have suicidal thoughts and all of this business," Blaze said. "And it was not a happy time for me, coming from WOLFSBANE and being a fan of IRON MAIDEN. I was anti-grunge. I liked some of the music, but the attitude was all wrong for me. I thought, 'Why can't you have this great music without this attitude? Why do you have to hate IRON MAIDEN? Why can't you like NIRVANAand like IRON MAIDEN? Why can't you like SOUNDGARDEN and like…? It's good music. Why do you have to have this…?' It was just wrong, man. And I think that was part… Because they had the attitude, it started to split the scene, and there was no going back from that."

By the time Bayley was booted from IRON MAIDEN to make room for a returning Dickinson in 1999, global music sales peaked and there was a marked shift in media consumption among the younger audiences. "What was happening, CD sales worldwide were going down," Blaze explained. "If you remember, that was when METALLICA sued Napster. And they got a lot of stick for that, but they were doing something which was right. They were stopping pirates; they were stopping people stealing stuff without permission. And what happened, those CD sales started going down, and that's it. So all these artists which could put on these huge shows, [and] they could supplement the tour with CD sales, that started to hurt, man, and there was no money coming from CDs. EMI closed down every factory in every country of the world that made CDs; EMI stopped making CDs. So this is it, man. That's the real story of what was happening. So I was there in that time of fear and darkness in the music industry, when there was so much paranoia around. And that was a very dark time."

The 53-year-old Bayley, who was born in Birmingham, was the original frontman in WOLFSBANE, but left to join MAIDEN, with whom he recorded two studio albums — 1995's "The X Factor" 1998's and "Virtual XI" — before Dickinson returned to the group.