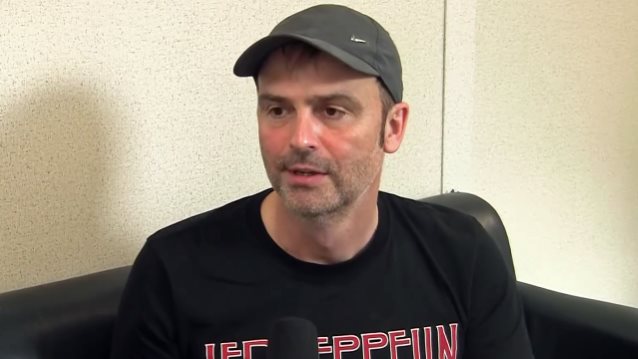 BLIND GUARDIAN To Release Live Album In 2018; Orchestral Album To Follow In 2019

Alan Dixon of The Metal Voice conducted an interview with vocalist Hansi Kürsch of German power metallers BLIND GUARDIAN at this year's Heavy Montreal festival, which was held August 6-7 at Parc Jean-Drapeau in Montreal, Quebec, Canada. You can now watch the chat below. A couple of excerpts follow (transcribed by BLABBERMOUTH.NET).

On BLIND GUARDIAN's decision to perform its 1995 album "Imaginations From The Other Side" in its entirety on the band's upcoming North American tour with GRAVE DIGGER:

Hansi: "I was surprised myself. The point is we have toured for 'Beyond The Red Mirror' a long time now. We do, for the first time, the second leg of a North American tour. And we just thought, 'Well, what chances do we have to set up new songs in a proper way? because we didn't have any time. And since André [Olbrich, guitar] seemed to have a conceptual album tour in mind for a while, he came up with that resolution. And, yeah, I somehow liked the idea, and so did Marcus [Siepen, guitar]. And then we worked on it. And it appeared to us like the most attractive thing to do. Because people can be pretty sure that they are going to listen to different stuff in comparison to what they have heard last year, actually. And therefore it was a pretty good idea. We prepared a few more songs which we haven't played, so I would say 75 percent of the shows will be different to what we have done twelve months ago."

On why "Imaginations From The Other Side" was chosen over other albums:

Hansi: "It's a very successful album — maybe the second most successful album of BLIND GUARDIAN, just behind [1998's] 'Nightfall In Middle-Earth', I would say. There are still a lot of people liking that album most. And the main point for us is it is easier to prepare it than, for instance, 'Nightfall In Middle-Earth' or [2002's] 'A Night At The Opera'. 'A Night At The Opera' would be a nightmare, and I would say, 'Well, give me another six months, at least.' Well, apart from that, it's so intense. It has a vivid live feeling, and that's also different. You spoke about the orchestration and about the epicness of songs, and they contain a little bit of the epicness, but they are still on the thrashy side as well, and I believe that's, in a live situation, pretty good."

On where BLIND GUARDIAN can take its music next after 2015's "Beyond The Red Mirror" album:

Hansi: "[Producer] Charlie Bauerfeind was a great help there. We have had many, may ideas, but he, at a certain point, came up with the idea to drive things into a stronger direction even, into the orchestral direction, so that is where we would go next. And then it totally makes sense, because after that, we will have time to keep our focus on new dimensions which we could explore, but since the orchestral elements are so strong on 'Beyond The Red Mirror' already, I believe it will be a little easier for people to consume what we are doing with the orchestral album, because that's a plain orchestra with me singing. Typical BLIND GUARDIAN songs — you will immediately recognize that it's BLIND GUARDIAN, and it may be even easier to consume than 'Beyond The Red Mirror', because 'Beyond The Red Mirror' is very massive and very progressive while the next album, the orchestral album, will be very melodic, very intense, but classical intense."

On the upcoming orchestral album:

Hansi: "It's all new songs. We started with these songs when we did 'Nightfall In Middle-Earth'. We got the first two songs back then, and I was really pushing to have them on 'Nightfall', and [the other guys were] just, 'They don't fit. They are too special. So why not work on a whole album like that?' And I said, 'Yeah! Great idea! And we are going to release that five years from now.' 'Yeah, five years from now.' [Laughs] So twenty years later, we're still working on it. But composing-wise, we are almost working on the second album already."

On when he thinks the orchestral album will be released:

Hansi: "The orchestral album — I was wrong with that ever since 1998 — is going to be released in 2019. Because we recorded a lot of shows last year, and we are going to release a live album in 2018. [The live album] will be a double. We are still working on the songs in terms of choosing which songs to take from which city. I believe once we are back from North America in November, we are going to mix it."