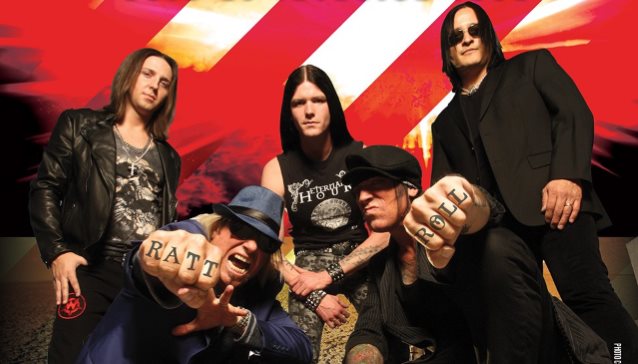 Said Blotzer in a statement on Facebook: "While we are shocked and saddened by the events that led up to his departure and do not agree with the manner and time frame in which he chose to let us know, in that only giving us only two days for his replacement, we all can live with his decision to move on with his career and wish him the best in the future in country music."

He added: "RATT will, with great integrity, rear up on its back legs with its head high and come out to Sturgis at the Buffalo Chip in front of 35,000 fans this Thursday then Montana Rockin' The Rivers festival with 20,000 Friday kicking all kinds of ass as always.
"We know you understand that things don't always end up the way we'd like them to. But, know that we have high expectations and want that to translate to the stage with the best players as always."

The drummer has been touring the U.S. for the last few months with his own version of RATT, featuring several new members alongside bassist Robbie Crane, who previously played bass for RATT from 1996 to 2012 and appeared on the band's 1999 self-titled album and "Infestation".

Blotzer earlier in the month hinted at trouble in the RATT camp, telling ClassX Radio: "We are a great band, that's all I can say. I'm so proud of us, you know. But I also wanna see people having their act together on every level. That includes me, too. Nobody's immune from the… from what we've gotta do out there.

"I'm doing all the work behind the scenes, and these cats, all they've gotta do is show up and do their part," he added.

"They'd better grow up real quick here, because there's a lot of sailors out there that would give their leg to go out on this ship."

Blotzer also defended his decision to go out on tour as RATT without any other original members of the band, explaining that fans just want to hear the music performed the way it was recorded on the group's albums.

"No matter what, this band plays so good and does such great integrity to the music of RATT," he told ClassX Radio. "That's why everybody's been hired. It's been uncanny. Especially for the age of some of these guys. The lead guitar player, he just turned 22 about, I don't know, a half year ago or something, and he's amazing. He cops Warren's [DeMartini's] stuff amazingly. The singer just blows Stephen Pearcy out of the water at this day and age. And frankly, [he sounds better than Stephen did] even when we started out."

Blotzer also addressed the legal battle that is playing out between him and DeMartini over the rights to the RATT name, with the guitarist filing a lawsuit last fall claiming that the drummer was falsely advertising his "tribute band" as the real thing. That dispute is still pending in California state court.

"God bless Stephen and my other RATT cohorts," Blotzer said. "I mean, we made history; I recognize that, I appreciate it. We all wrote it together, wrote the music, rode the waves. But now, it's, like, okay, guys. There's three rafts left here. You're in or you're out. And it's been going on for five years. And I wanna finish the race. So that's where I'm at."

He continued: "I do not wanna insult anybody in the old-school RATT camp — I call it the class of '84 — but, you know, these guys were our own worst enemies. They're on a five-year strike thing that was going on between Juan Croucier [bass], who came back in after twenty years gone, and got Stephen riled up. And here we sat… last year was five years [that we were away from the road], [and] this would have been number six, and I was not willing to sit, as one of the owners of the name; DeMartini and myself own the name. And I'm, like, 'I've got a great band, Warren. Do you wanna come out and play with this band?' It'll be our band, obviously, but these are great. And he just didn't wanna have any part of it. So I said, 'I'm going out. I'm taking it out.'"

Despite the fact that he has not yet reached an agreement with DeMartini over his use of the RATT name, Blotzer predicted that the new version of the band would stay on the road for the foreseeable future. "We're booked through December 30 at this point, and they're already booking next year. So RATT is gonna be out there, man. The cast could change; it could stay the same. I don't know. It's like a football team. You want the team to win? You root for the team, 'cause you like the team. And we have a good team, and we have great songs, and we will perform those excellently."

Thank you for another great week of amazing shows, great times and great people. We are truly blessed to have everyone...