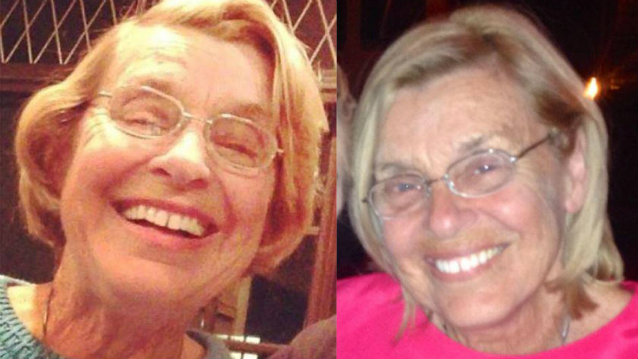 According to CBS8.com, authorities have found the body of MEGADETH mainman Dave Mustaine's mother-in-law, 76-year-old Sally Estabrook, who was last seen at a campground near Julian, California on October 4.

Sheriff's deputies say someone called 911 after they discovered a female body in some heavy brush in Julian around 3:20 p.m. Wednesday, November 26.

Authorities say the clothing resembles what Estabrook was wearing when she went missing.

The remains were found at 200 block of Coulter Ridge Road, which is a half a mile from the Pinezanita Campground where she was last seen.

Sheriff's deputies say it doesn't appear there was any foul play.

Medical Examiner’s Office will conduct an autopsy to try to determine the cause and manner of death.

Search-and-rescue teams from four counties and the U.S. Border Patrol and more than 300 volunteers took part in the search for Estabrook.

Speaking to the 101 KGB radio station in San Diego, Mustaine previously said about his mother-in-law's disappearance: "We live in Tennesse, and we have our house in California too, so we had just moved back to Tennessee and then we get this phone call [about Estabrook being missing]. And it's, like, 'Well, is she in the campsite and you're gonna find her in an hour?' 'Is she at a girlfriend's camper or something, or is she gone?' And she's just plain gone. They had bloodhounds, they had cadaver dogs, they had helicopters, motorcycles, ATVs… everybody."

He continued: "The other thing, too, is even the most terrible of convicts still has a mother, and when they're driving down the road and they see this old woman, the person could have pulled over and helped her and have a criminal past and they can't say anything. It could be somebody of Latino descent that is here without documentation and is afraid that they're gonna get deported. It could be a number of different things. We don't care what the situation is. Just help us find my wife's mom."

Asked if he was happy with the job that the search-and-rescue teams and law enforcement were doing, Mustaine said: "I am, actually. They have gone on longer than they were supposed to. They held off on the cadaver dogs and switching from rescue to recovery longer than they should have. Even the pilots that were flying the helicopters, they've got a routine that they have to do over the city, and they were all flying back out to the site. They covered 60 square miles with the helicopter. There is no way she went that far."

Mustaine said that Estabrook was in the "severe" stage of Alzheimer's disease and "couldn't put three words together." He added: "That's the thing that is of comfort to us, because we do know that at some point she's gonna go in Heaven, but we don't want it to happen now, for Christ's sakes."