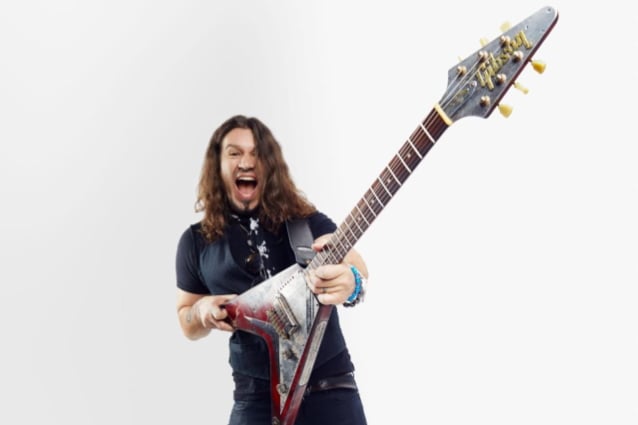 Gibson has announced that guitarist Phil X — an integral full-time member of BON JOVI since 2016 — has joined as brand ambassador.

Phil X and his band, PHIL X & THE DRILLS will release their fifth studio album, "Stupid Good Lookings Vol. 2", in early 2020 on Golden Robot Records. The new album features a diﬀerent drummer on each song, including Tommy Lee, Taylor Hawkins, Liberty Devitto, Kenny Aronoﬀ and Ray Luzier. PHIL X & THE DRILLS have been enjoying a rapidly growing international fan base supported by the release of four solid albums: "Kick Your Ass In 17 Minutes" (2009),"We Bring The Rock N Roll" (2011),"We Play Instruments N Sh!t" (2012) and "Stupid Good Lookings Vol. 1" (2019).

"Phil is one of the most versatile guitar players today and has an unparalleled ability to cover a wide range of music genres," says Cesar Gueikian, chief merchant officer of Gibson. "Phil is one of my favorite songwriters and entertainers and every day he inspires fans of all generations to pick up a guitar and play. Above all, Phil is a wonderful person, a friend and I see him joining our Gibson family as coming home."

Q: Welcome to Gibson. How do you like your new Explorer/SG/Les Paul?

Phil: "Thank you. I'm very partial to the SG style, but I love the neck of the '58 Les Paul and a thicker body, so my hope is to marry the two into a balanced dream guitar. Plus, I love Les Pauls, Explorers and Flying Vs, so I feel fortunate to finally be with Gibson."

Q: What is your personal history with Gibson guitars?

Phil: "I've owned and played many over the years. It's funny, when I was a budding session guitar player in L.A., I had to borrow a Les Paul from a friend to go record Alice Cooper's 'Brutal Planet' record. Now I have a few. [Laughs] Most of the guitars recorded on Daughtry's first record were a '59 double-cutaway Jr and a mid '60s Trini Lopez. On the 2017 BON JOVI 'This House Is Not For Sale' tour, I tried my Explorer for 'Lay Your Hands On Me' one night and BAM!, it had to be that guitar every night."

Q: What Gibson artists inspired you to play and who might still inspire you today?

Phil: "Of course, it was Jimmy Page and the Les Paul. The KISS perfect lineup was a Gibson bass, Ace's LP and Paul's Flying V. Man… I REALLY wanted a V after that. Now, what I love seeing is super-old pictures of Eddie Van Halen rockin' a Les Paul. Just completely on fire and blowing minds without a whammy bar."

Q: You teased a new Gibson SG on Instagram. Tell us about this guitar. What is it?

Phil: "That is actually a 1964 Custom Shop SG I saw at the showroom in Nashville in August. It didn't catch my eye. It PUNCHED it. That finish looks like a delicious apple. The neck is fatter than usual too. I played it with JOVI in South America last September, but as I'm getting ready to really dig into the company as well as do a DRILLS tour in March, I had to personalize it. I put an Arcane PX100 (a P90 style pickup in a humbucker housing) in the bridge position, pulled the neck pickup out (and replaced it with a DC action figure) and just ran one volume and one tone. This is my "pre sitting down with the Luthier at Gibson and throwing around ideas for a signature" PHIL X MACHINE and it KICKS ASS!"

Q: How do you go about choosing a guitar that will be appropriate for the demands of playing in BON JOVI?

Phil: "Of course, each guitar has to suit each song. For most of the catalogue, anything that simply produces a great ROCK tone works. It'll be harder to pick what NOT to play. i.e.: 'Bed Of Roses'... do I want to play a 57 Custom Shop Gold Top or a natural ES355? It'll be a blast putting guitars to songs. I'm actually excited to dig into that process."

Q: If you only had one instrument to play for the entire gig, what would it be and why?

Phil: "If it's a DRILLS gig, the 1964 Custom Shop personalized SG mentioned above because of its simplicity and all the tones at my fingertips with just one volume dialing in the ANGER of the PX100 that rolls back to a chime. For Jovi, there's a little more demand covering a 30-year career. Probably an ES335 with Filtertrons and coil tapping options. You can get pretty much anything out of a workhorse like that."