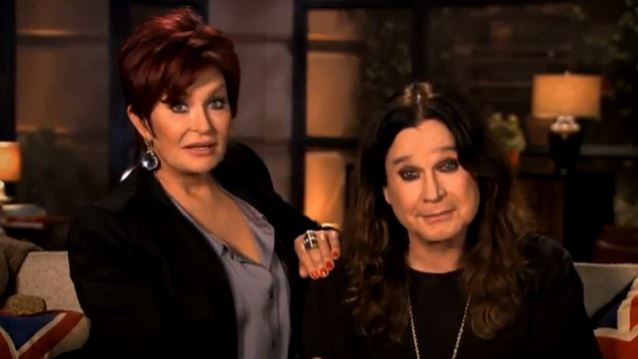 According to The Pulse Of Radio, an excerpt from Sharon Osbourne's new memoir that was published by U.K. tabloid The Sun over the weekend reveals just how ugly it got between her and Ozzy earlier this year when Sharon found out that her husband of 30 years had relapsed into drug and alcohol abuse.

Sharon writes that she found out about the BLACK SABBATH singer's drug abuse on their 30th wedding anniversary when she saw texts on Ozzy's phone asking people to supply him with drugs and and saying, "Don't tell the old girl." Sharon confronted Ozzy and he promised to go to rehab, but ended up fleeing to the U.K. instead.

Sharon retaliated by selling off all of Ozzy's prized cars, recalling. "There was no way I was going to risk him getting in one of them while he was drunk and hurting someone . . . Ozzy says now that it proved to be the most expensive drink he's ever had."

When the couple reunited in Los Angeles a few weeks later, Ozzy was so "cocky and arrogant" that Sharon says she "snapped," demanding a divorce and asking for 100,000 British pounds — around $162,000 — a month in spousal support.

Sharon writes that when Ozzy replied, "Over my dead body," she threw a cup of coffee at his head, adding, "Then I grabbed him and pulled at his precious hair with one hand, while trying to yank off his jewelry with the other. He went for me, trying to grab me in a headlock."

Ozzy told The Pulse Of Radio a while back that despite critics always saying that Sharon controlled his career and life, the truth was in fact the opposite: "My wife does not get involved with telling me about working. I tried retirement, it sucked. If I don't want to do anything, my wife can't make me do anything I don't want to do."

The estranged couple met up again in May after Ozzy had finally gone to rehab and was sober for two months. Sharon writes, "It seemed like forever since I'd looked into my husband's eyes, but now I was looking into sober eyes. The man I loved was present. I could tell he was relieved to be sitting next to me. I put my hand on his, took him in my arms and we cried."

The couple moved back in together in June.

Sharon's book, called "Unbreakable", is due out this month.

BLACK SABBATH wrapped up a North American tour last month in support of its reunion album, "13", and will tour the U.K. in December.