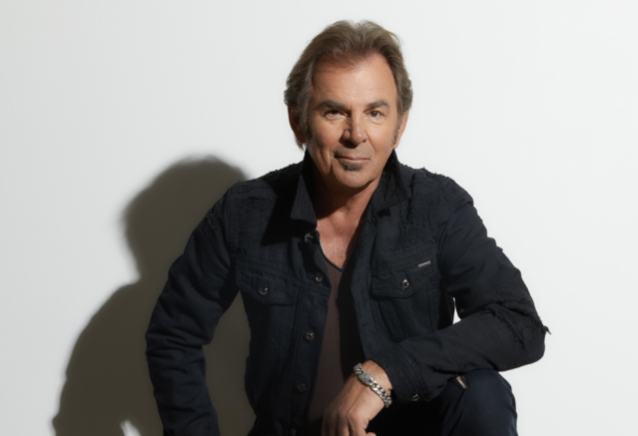 JOURNEY keyboardist Jonathan Cain has told ABC Audio that his latest faith-based solo album, "Arise", reflects his general unhappiness with the direction the U.S. has been going in recent years while also encouraging Christians to be more fervent in embracing their faith.

"I sort of landed on a revival theme, like an awakening, a call to prayer, a call to standing for freedom and standing for the church," he said. "And, you know, we had our freedoms diminished there during the lockdown. And I think everybody had to face the fact that the government can get in the way and churches need to stand up and say no. And a lot of them did."

Jonathan and his wife lead worship at New Destiny Christian Center in Apopka, Florida, where she is the senior pastor.

In 1976, Cain released his first solo record, "Windy City Breakdown". Three years later, he joined the band THE BABYS, and in 1980 became a member of JOURNEY, rounding out the songwriting genius behind the defining album "Escape".

"Arise" was released in May via Identity Records with The Fuel Music distribution. According to a press release, the LP "resonat[es] with joy and a profound sense of God's power and grace" and "offers a wake-up call to the church."

"Like faith in action, the music of 'Arise' moves to the spirit of revival. God is making his presence felt here on earth, and it's up to us to wake up, to feel it, feel the revival and just dig in," Cain said. "I hope that this music stirs up and awakens people in a way that they can become a part of what God is doing."

Encouraging this participation is "Arise"'s lead track, "Roar", which features the lyrics: "Release the roar, in your praise. Release the sound, call His name. Use your voice, let it out. Silence the enemy, shout it loud."

"We need to put roar in our praise. We better stand up for our faith," Cain said. "As Christians, we must not sit by and say, 'Well, politics and religion don't matter.' They surely do. There are a lot of people that just let status quo be, and I'm not one of them…The enemy is at our front door trying to destroy this church. We are soldiers. We wear the armor of God, so be victorious. Stand in the gap with the Holy Spirit and band together."

Cain, a Chicago native, has spent decades pouring out his musical gifts in front of huge audiences, but when not touring, he can be found serving his home church and has never been more fulfilled than in his role as worship leader.

"Worship is 'What do you have for me?' God wants to know what you're bringing," he said. "A lot of times people come to worship thinking that they're going to get something out of this when really, it's the exact opposite. You need to lay it down at the altar for God. That's what worship is."

Along with his solo music, Cain wrote and recorded new music with JOURNEY, which will release its first album of all new songs in over a decade, "Freedom", on July 8.