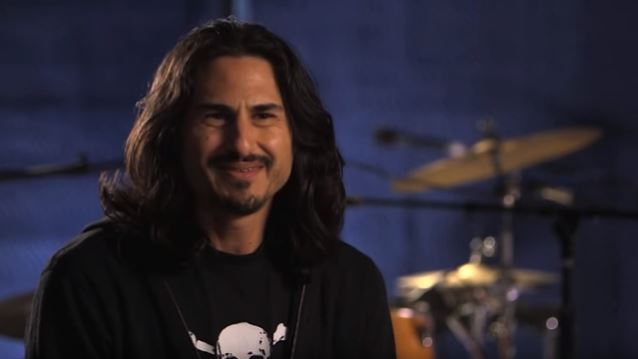 RAGE AGAINST THE MACHINE and PROPHETS OF RAGE drummer Brad Wilk spoke to Alternative Nation about playing on the latest BLACK SABBATH album, "13", in place of absent original SABBATH drummer Bill Ward.

"That was an absolute dream come true," he said. "I was a 14-year-old kid sitting in his room with a record player trying to learn Bill Ward parts, and BLACK SABBATH is one of my favorite groups of all time. So to actually be asked to play drums with them was an incredible experience.

"For the first week, it was really hard for me to even deal with the fact that I was in a room with them possibly heading towards making a record with them."

He continued: "They're all great people. I loved being around them, I loved hearing their history and stories while we were making the record. I loved working with Rick Rubin; he is an incredible producer.

"I was just blessed to be in the room doing that. To say I was a part of it was incredible. However, even though it was just the most amazing experience for me, I wish that it could have been Bill Ward instead of me, as amazing as it was for me."

SABBATH bassist Geezer Butler told The Pulse Of Radio how Wilk did during the "13" sessions. "I think in the studio, Brad was more like a Bill kind of thing, like an old-school drummer — more jazzier and that kind of thing, which suited the album, the new album," he said.

Ozzy was asked by Billboard in a 2013 interview why Clufetos did not record the drum tracks on "13". He replied: "The way it was dealt with wasn't very fair on Tommy. Rick Rubin just didn't want to work with him for reasons I don't know. He's a great drummer, and he's been with me for awhile now and I just felt that nobody discussed the decision about Brad to me, and it's not fair to Tommy. Tommy was promised the album... It's not because he was my drummer and my ego wanted him. It was just the fact the way it was dealt with. It just got me a bit, it got me pissed off about it. It's alright now. He's a great drummer. I don't know what the problem was."

As for Wilk, Osbourne said he "did a good job. I don't have anything bad to say. He's a very nice guy."

In an e-mail to Billboard, Rubin explained that "Brad is a muscular drummer with great feel and understands the groovy nature of their music — RAGE AGAINST THE MACHINE is a groovy rock band, not a metal band — so it was worth a try. When they played together the first time, it was obvious he would do a great job in the seat Bill left vacated. Bill's a great drummer and I'm sure it would have been an amazing album with him. We all wanted him to participate."

Ward claimed that he sat out the reunion because of unfair contractual terms, although the members of SABBATH have hinted in other interviews that he wasn't physically up to the task.

"13" was the first album in 35 years to feature Osbourne, guitarist Tony Iommi and Butler all playing together.