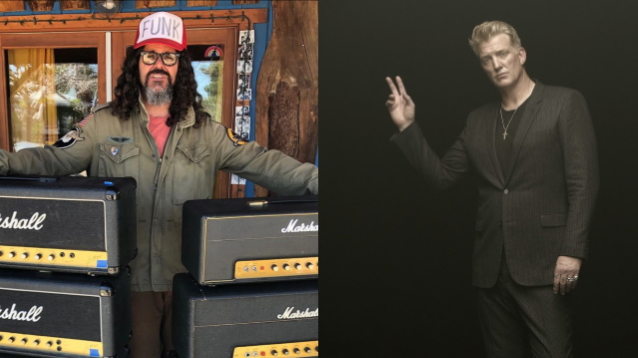 Brant Bjork has revealed that he tried to reach out to Josh Homme about a possible reunion of KYUSS's classic lineup.

The former KYUSS drummer said that he attempted to repair his relationship with the group's leader after Homme said in an interview last summer that he would be open to playing with his former bandmates again in order to rewrite KYUSS's final chapter. At the time, it had been eight years since a nasty legal dispute ensued when Bjork, singer John Garcia and bassist Nick Oliveri reunited in 2011 as KYUSS LIVES! While Homme initially supported his ex-bandmates' decision to tour under that moniker, he and bassist Scott Reeder sued Garcia and Bjork in early 2012 for "trademark infringement and consumer fraud" when Garcia and Bjork allegedly attempted to trademark the KYUSS name. A judge ruled later that year that Garcia and Bjork were not permitted to release any recordings under the name KYUSS LIVES! and warned them that future concerts under the KYUSS LIVES! mark "might continue to subject them to liability for trademark infringement."

Speaking to TotalRock's "Hobo On The Radio" podcast, Bjork addressed Homme's remark that he would like to see KYUSS end on a high note. "It's an interesting comment, and I can totally relate to his feeling, because I was really bummed the way that KYUSS broke up in '95; I didn't want it to end that way," Brant said (as transcribed by BLABBERMOUTH.NET). "So what we should have done is never broke up. Had we known as young dudes — which, let's face it, we were young, and it's hard to do — had we known how to keep a band together, we could have just had that band moving all along and taking breaks from time to time to pursue other things. But, yeah, it has this kind of stop and rebirth and reinvention, and, yeah, I share his frustration. But there's always a way to do it, and it just takes communication. I've always said if you communicate, you can relate, and if you can relate, you can create. That's how it works. And if you're not communicating, then there's gonna be absolutely no creating. And that's where the problem is — is that we're unable to communicate. And over the years, I think Josh and I kind of being the ones who, in a lot of ways, oversaw this band existing, in certain terms, we just have a hard time communicating. Which is interesting, because when we were kids, we were great at communicating. We were great at communicating and relating and creating, and that was what made us have the partnership that we had within the band. And then the communication broke down and we were never able to put it back together."

He continued: "I heard his comment. And interestingly, I thought it was really fitting that it was Nick who actually called me and said, 'Hey, you should check this out.' I was, like, 'Oh, yeah. For sure, man. That's pretty trippy.' And so I listened to it. And to be honest, it was really kind of relieving to hear him speak the way he was. I don't talk to him, I don't have a relationship with him anymore, so I don't know who he is and where he is and what he does anymore. But in terms of what we have and did with KYUSS, I thought it was some healthy words and a healthy perspective on things. And it even went to the extent that a friend of mine was, like, 'Hey, you know what? Maybe it's a good time to reach out to him.' And I thought, 'Yeah, it's not a bad idea, man.' I think we're at an age, and after all that we've done and experienced individually, and even collectively when we were younger, I think, there's no reason for us to just kind of say, 'Hey, man…' Not unlike what I'm doing right now with Nick in STONER — a kind of way to say, 'Hey, why don't we just go back and kind of try and plug into that time before we were accomplished professional musicians.' 'Cause there's a starting point to everything. Maybe there's the ability where we can go back before all this stuff happened and try and communicate from that place. I don't know. Maybe that's a fantasy. I don't know. But it was an idea. And I reached out to him. And he actually was, like, 'Yeah, let's talk. And I'll get back to you.' And I was, like, 'All right. Cool, man.' And then it never happened. So I don't know what to say about that.

"As far as a KYUSS reunion happening, that was my attempt at not necessarily getting the band back together but at the very least developing some communication with Josh," Brant added. "And it seemed at first that it might be time and [we] actually [might] be able to connect. But it didn't happen. That was months and months and months ago, so it's clear that it's not gonna move forward. And who knows? Maybe he puts KYUSS together and puts his own version together or whatever. I don't know what he's gonna do. We'll have to just see."

Josh discussed a possible KYUSS reunion while being interviewed by Kyuss World Radio about the 25th anniversary of the band's final album, "…And The Circus Leaves Town". The Californian four-piece split three months following the LP's release, resulting in it being less critically and commercially successful when compared to the two KYUSS albums which helped birth the stoner rock movement — 1992's "Blues For The Red Sun" and 1994's "Welcome To Sky Valley".

"My philosophy has always been, never do a reunion, never do a sequel. It's not what it was; it's what it is. And that's kind of how I've felt," Homme said.

He added that he's generally not in favor of reunions.

"A legacy that involves having been at the epicenter of a scene that got created, it's so fragile," he said. "It's like an ice sculpture. And I don't wanna be a blow dryer on that thing."

But he didn't completely rule out the possibility. "That being said, I was in full support of KYUSS LIVES! and I would go to the shows and I told them as much, until what Brant and, unfortunately, what John tried to do. And that was terrible.

"There have been times I thought it cannot end that way, and the only real way to end it correctly now would be to play," Homme continued. "And because they sort of perverted the punctuation and they knocked the wing off this beautiful dragon that's an ice sculpture, and the only way to put the motherfucking wing back on would be to [play again]."

"I have thought about this, especially in the last few years, to do something special, and even to make up for that mistake of Brant and, unfortunately, John, to make up for it. [I thought we should] play and give all the money away. Like, play for the fans — cover your costs and make it five bucks. Figure out a way to be, like, this is how the punctuation will end the sentence of this band. Because it was never about money — it never was about money. It never was about fame, and when it felt like that was the move they were making, I was so sad."

After KYUSS split in 1995, Homme went on to form QUEENS OF THE STONE AGE.

In a May 2012 interview with RolllingStone.com, Bjork stated about Homme and Reeder's lawsuit, "They don't want to mention that they trademarked the name KYUSS after I left the band, assuring that I had no rights in KYUSS's future. They're both accusing John and I of doing something that they actually did themselves. Their inner conflict is this: both Josh and Scott want control and money from KYUSS LIVES!, but they don't want to participate and they ultimately don't want us to exist. The double standard is unbelievable."

He added, "Josh and I were the creative force within the band and after the completion of our second record, 'Blues For The Red Sun', we developed an opposing view on how the band should exist and operate. In 1992, Josh discovered publishing, which is the financial revenue stream for songwriting. After that, he wanted to write all the songs. As a drummer, I couldn't make him play my songs. I wasn't going to compromise my heart and soul and play drums for Josh to make money in a band I started. So I left the band. I was a confused, angry and sad 19-year-old idealist who sacrificed my love of my band for what I believed in. Two and a half years later, Josh would break up the band after John confronted him about the same thing; his need to control the band for personal gain."

Bjork and Oliveri recently formed a new band called STONER. They are joined in the trio by Ryan Güt.