A virtual version of BREAKING BENJAMIN will perform in the multiplayer video games AdventureQuest 3D and AQWorlds. The musicians will appear as avatars who will play a "battle concert" in the game over a two-week period starting February 18. The publishers say that the performance will take place in a "new dimension" and be the game's "darkest battle concert yet."

Artix Entertainment wrote in an announcement message: "Experience BREAKING BENJAMIN in an otherworldly video game event. Join us for an in-game concert on monster-infested floating islands. Battle as the band plays. Team up with friends and other players defeat powerful and horrifying creatures. Explore this strange new concert venue with parkour and portals. Defeat the boss monster of this battle concert and earn treasure & rare rewards."

BREAKING BENJAMIN frontman Ben Burnley is a confirmed video game junkie, and he told The Pulse Of Radio a while back he's always looking to get involved with them. "Well, we always have our eyes peeled, and you gotta look for the right opportunities to do something like that, and I'm constantly playing video games and I look through video game magazines for projects up and coming," he said. "I find the games and I tell my guy at my label, I tell him and then he gets on it, sees what he can do about it."

Both KORN and ALICE IN CHAINS have also made similar appearances in AdventureQuest 3D and AQWorlds.

BREAKING BENJAMIN is currently on a co-headlining tour with KORN. The Burnley-fronted act is touring in support of its new compilation album "Aurora", which features reimagined versions of its songs. 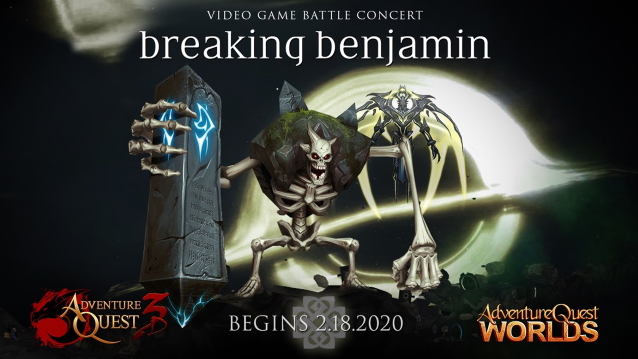