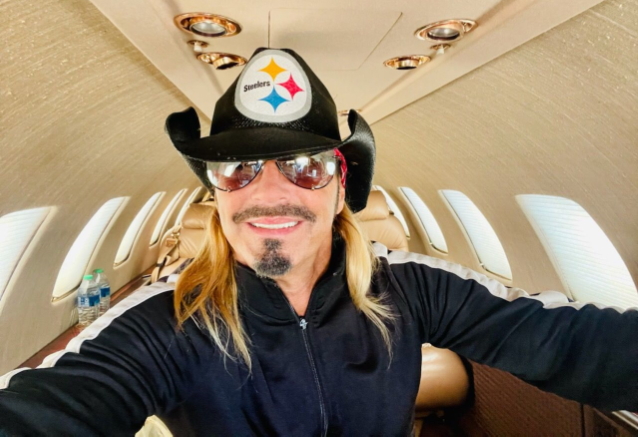 POISON singer Bret Michaels has surprised Heisman Trophy candidate Matt Corral's parents and offering a flight on his plane, so they don't miss what could be their son's final home game at Vaught-Hemingway Stadium on Saturday night (November 20). Corral's parents, Liz and former U.S. marine Peter Corral, will arrive in Oxford, Mississippi via Michaels's plane to see Ole Miss hosts Vanderbilt at 7:30 p.m.

"I wanted to surprise the Corrals, as they are great family friends," said Michaels, who continues his solo "Nothing But A Good Vibe" tour and prepares for the upcoming stadium tour. "Knowing the chaos of holiday air travel, I wanted to ensure that Liz and Peter could make it to what may be their son's last home game at Ole Miss. So, I was excited to offer this gesture to two incredible parents who we are honored to call good friends."

The two-time Humanitarian Of The Year honoree and son of a veteran, Michaels continues to honor veterans like Corral's father and others who have served long after the celebration of Veteran's Day. In addition to providing his personal plane, Michaels continues to support veterans through a personal donation matching the Pittsburgh Steelers' contribution to Bret's father's VFW in Mechanicsburg, Pennsylvania.

Michaels, a sports fanatic, recently rocked Heinz Field on ESPN's "Monday Night Football" with four-time Super Bowl champion Rocky Bleier and army veteran Nelson Lowes. A longtime supporter of the U.S. military, Michaels has never made it about politics or policy but rather about pulling together community and celebrating freedom.

Michaels is well known around the globe for bringing veterans, frontline workers, first responders, teachers, and utility workers on to arena stages to honor them during his hit song "Something To Believe In".