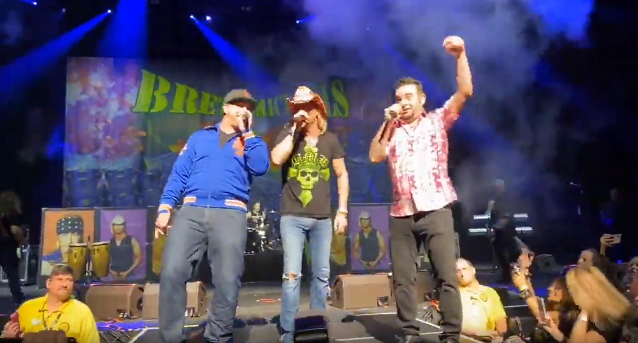 Bret Michaels was joined by *NSYNC singers Joey Fatone and Chris Kirkpatrick on stage Friday night (December 13) at Seminole Hard Rock Hollywood's Winterfest in Hollywood, Florida for a performance of the POISON's 1988 hit "Nothin' But A Good Time".

Kirkpatrick later shared a photo from the side of the stage, writing on Instagram that he managed to check an item off his bucket list with the surprise jam.

"Got to sing 'nothin but a good time' with one of my favorite rock stars of all time @bretmichaelsofficial !" he said.

These days, Michaels splits his touring time with his solo band and POISON, which will be heading out with MÖTLEY CRÜE, DEF LEPPARD and JOAN JETT AND THE BLACKHEARTS on their joint stadium tour in 2020.

"It's 100% gratitude with positive attitude," Michaels recently told CantonRep.com. "I am thankful to be on that stage. To play music and travel and get to meet people, this is what I live to do. The fact that I've got to do this for so long, I'm blessed. I still have that same passion, energy and attitude as when I started as a teenager in my basement and garage."

Some of Michaels's solo hits include "Custom Built", "Rock My World" and "Jammin' With Friends".

Got to sing “nothin but a good time” with one of my favorite rock stars of all time @bretmichaelsofficial ! Bucket list ✔️