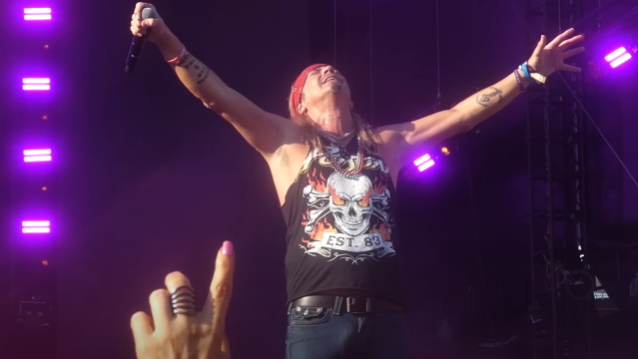 POISON frontman Bret Michaels says that "an unforeseen medical complication" forced him and his bandmates to cancel their concert in Nashville, Tennessee Thursday night (June 30).

The 59-year-old singer was hospitalized just before POISON was set to perform at Nissan Stadium as part of "The Stadium Tour" with DEF LEPPARD, MÖTLEY CRÜE and JOAN JETT & THE BLACKHEARTS.

As seen in the video below, the members of the band came onstage to let concertgoers know that Michaels had suffered a "bad reaction to medication" and that they wouldn't be able to do the show without him.

Late Thursday night, Bret released the following statement via his social media: "To the incredible fans in Nashville, thank you for all your well wishes!! I was truly fired up to get on stage in the Music City and perform, but due to an unforeseen medical complication & following hospitalization, it was not possible. I send my deepest apologies for being unable to rock the stage tonight!!! I'm working on being back 100% very soon & hope you rocked hard with my friends Motley/Leppard/ Joan and Classless Act!!!"

Earlier in the day, POISON announced that it was canceling the VIP meet-and-greet with members of the band in Nashville "due to COVID positive cases within the POISON touring party". Not long after, it was announced that POISON was scrapping its appearance at the concert altogether.

POISON has two more shows scheduled for the weekend — in Florida and Mississippi. It is not presently clear if those performances will go ahead.