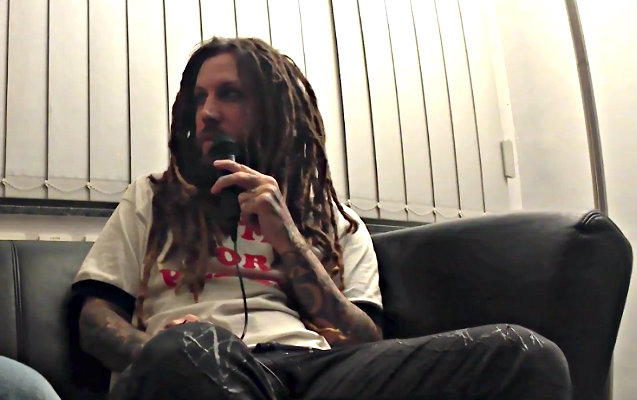 Germany's Metal-Heads.de recently conducted a special interview with Brian "Head" Welch where the KORN guitarist was asked to comment on various albums and songs from the band's vast catalog. You can now watch the chat below.

While speaking about KORN's 1996 album "Life Is Peachy", which contains the song "Chi" — named after former DEFTONES bassist Chi Cheng — Welch was asked if KORN was still "close" with the members of DEFTONES. He replied: "No. When we see 'em, it's, like, 'Hey, bro, what's going on?' But we're not close with 'em. They just like to do their own thing. We would like to tour with 'em again one day, but I don't think they want to, so… But it's all good. When we see 'em, we just don't talk about touring. We're just, 'Hey, bro. How's the family?' Stuff like that."

Back in 2009, KORN bassist Reginald "Fieldy" Arvizu and other musicians recorded an instrumental track called "A Song for Chi", with all proceeds going to Cheng, who was left in a coma following a 2008 car accident. Cheng died in 2013, having never been able to make a full recovery.

DEFTONES singer Chino Moreno told SPIN magazine last year that he felt his band was unfairly lumped in with all the other so-called "nu-metal" acts shortly after the release of the group's 1995 debut, "Adrenaline". "Obviously, our first record comes out — KORN had put out a record maybe a year before — and right away, we were being compared to that," Moreno said. "And then obviously this nu-metal moniker started to come to fruition here, but it was kind of putting us in the same [category]. Even as early as 'Around The Fur' [1997], I felt like we were taking a left turn from just being what people expected us to be. I kind of knew that we were taking things somewhere else and somewhere that opened our creativity up so we wouldn't be so easily pigeonholed in with everything else that was going on."