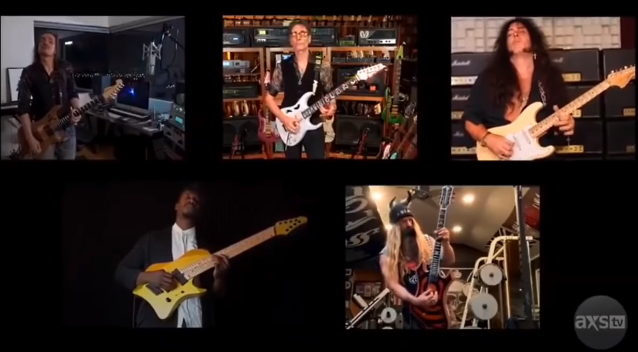 EXTREME guitarist Nuno Bettencourt was joined by his "Generation Axe" tourmates — Steve Vai, Zakk Wylde, Yngwie Malmsteen and Tosin Abasi — along with QUEEN's Brian May for a six-guitar performance of QUEEN's timeless classic "Bohemian Rhapsody" as part of AXS TV's "At Home And Social With Nuno Bettencourt & Friends" special. Video footage of the performance can be seen below.

"At Home And Social With Nuno Bettencourt & Friends" aired this past Monday (August 3) and benefited the Music Forward Foundation's Crew Nation initiative, raising funds and awareness for the touring and venue crews who are vital to the live music experience and have been negatively impacted by the shutdowns resulting from COVID-19.

In the spring of 2016, Vai, Malmsteen, Wylde, Bettencourt and Abasi teamed up for a North American tour called "Generation Axe", in which the five musicians shared a backing band and performed together in addition to playing individual sets. A year after their successful inaugural tour, the five guitarists reconvened for an 11-city tour of Asia that included a stop in Beijing, China. Select performances from that April 2017 concert appeared on a live recording, "Generation Axe - The Guitars That Destroyed The World: Live In China", which was released in June 2019 via earMUSIC.