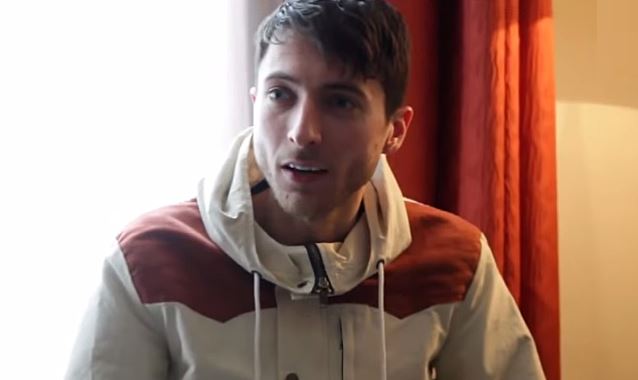 Kaytie The Rock Goddess of the Rock 105.7 WOBG radio station in Fairmont, West Virginia recently conducted an interview with keyboardist Jordan Fish of the British deathcore act BRING ME THE HORIZON. You can now listen to the chat using the SondCloud widget below.

Speaking about BRING ME THE HORIZON frontman Oli Sykes' recent revelation that the singer was "addicted to a drug called ketamine" prior to the making of the band's latest album, "Sempiternal", Fish — who joined BRING ME THE HORIZON in 2012 — said: "It was weird because I first met Oli and the rest of the guys when I was in another band before, and he was a big fan of my old band, so that's kind of how I got to know him. And the first few times I met him, I didn't even know him very well, but I just thought he was a bit crazy, 'cause he always erratic, I guess. Yeah, I mean, I just thought he liked to drink."

He continued: "When I first met him, he was just going through [his addiction], and they went away to write. This was before I'd even been involved. They went away to write, and it didn't go well. I know he kind of had a bit of an epiphany type thing, like, 'Shit, I need to actually go to rehab,' or whatever. And he went for a while. He was in there for over a month, I think. And I was still texting him on and off around that time. And when he came out, he said, 'Do you wanna come and write with the band?' The writing sessions they'd done before he went in had not been productive at all, really; they'd come out with nothing, because, obviously, he was going through so much and stuff like that. So when I came in, it was kind of, like, fresh… He'd just come out and he was okay, but it was all very new, and I think everyone around him was still concerned about him, 'cause he'd been through so much and stuff. It was a very weird time. So then I went to Sheffield — 'cause I don't live in the same place as the rest of the guys — and the first time I went up, I just worked with him for a couple of days. And we got really into it. And the first song we did was 'And The Snakes Start To Sing'; that was the only demo that they'd brought forward from those sessions. It was just the guitar chords that Lee [Malia] had written for the bulk of the song. So then we worked on that. We got really stuck into it.

"I can't speak for Oli, but I think from that point on, when we worked on that song, and it came out really cool, and he was really into it, really excited by it, and it was a new way of writing for the band and stuff, and I kind of think that gave him a good drive and good focus. And I think it helped a lot for him to have re-found his love for writing music and stuff, 'cause then after that, I went up pretty much every week for about two and a half months. And it's a three-hour drive for me… so I was, like… And I wasn't in the band at that point, so I was just doing it… I didn't really know what I was doing. At first I was helping out with electronics, then I was kind of writing with Oli and Lee. Every week, I'd go up and I'd sit there with Oli and Lee and we wrote the whole album that way.

"So, yeah, I think for him it was quite a cathartic process, because he'd just been through it and he was re-finding and rebuilding his relationships with everyone.

"I've heard a lot from the other guys and Oli has told me a lot about how bad it was beforehand, and I definitely didn't see it at its first, so I don't know the ins and outs of it. But my experience with Oli has just been as a level-headed, for the most part… Obviously, I knew him kind of before, but most of my relationship has been since he came out of rehab, and he's a completely different person, from what I can tell."

"And when I got out of that rehab I didn't want to fucking scream anymore, I wanted to sing it from the fucking rooftops. And it's all thanks to you, so thank you very much."

BRING ME THE HORIZON's fourth album, "Sempiternal", sold 27,000 copies in the United States in its first week of release to land at position No. 11 on The Billboard 200 chart. The CD arrived in stores on April 2, 2013 via Epitaph.