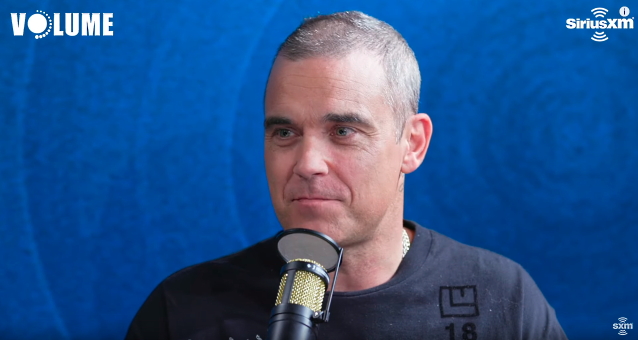 Robbie Williams claims that he was once asked to join QUEEN as the replacement for late frontman Freddie Mercury.

The British pop star says that he was approached by guitarist Brian May and drummer Roger Taylor to step into Mercury's shoes after collaborating with them up on a 2001 re-recording of "We Are The Champions" for the movie "A Knight's Tale".

"It was amazing. It was absolutely amazing," Robbie stated about being in the studio with the QUEEN legends. "I'm in the recording booth with Roger and Brian from the band, and we re-recorded 'We Are The Champions'. And I got to do the backing vocals with them, and how intricate they were, those backing vocals, and how many parts it took to get that sound. And to be in the room with real history, like proper history, just felt absolutely incredible."

Asked if there was ever talk of him having a permanent role in QUEEN, Williams said: "Yeah, there was, yeah. They asked me to do it. And even though I'm very confident here on the microphone, I have suffered with incredibly low self-esteem. And I just thought I'd save them the audacity of me even trying to step on a stage and be in the same echelon as Freddie Mercury, 'cause he, to me, is angelic — he's God-like. It was just too scary."

In 2004, QUEEN recruited BAD COMPANY singer Paul Rodgers, with whom they completed two world tours and released an album, "The Cosmos Rocks", in 2008. They amicably parted ways a year later when Rodgers returned to BAD COMPANY. Since 2011, QUEEN has been fronted by former "American Idol" star Adam Lambert.

"Look, Adam Lambert, if he wasn't such a lovely person, which he is, I would just be terrified of him because of his pure talent," Robbie said. "His voice is absolutely incredible. And he's an incredible performer, and a lovely person to boot. I'm really pleased when I meet people that I'm just overawed by their talent — it gives me a talent hard-on — and then they're nice. It's much better than meeting people that give you a talent hard-on and they're assholes. You're just, like, 'Oh, I hate everything you've done now."