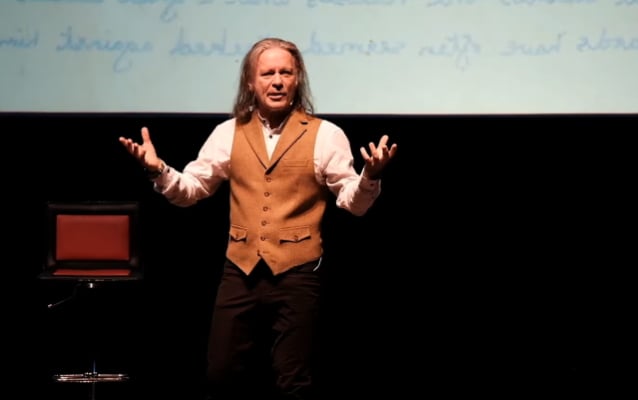 During his February 19 spoken-word show at Uptown Theater in Kansas City, Missouri, IRON MAIDEN singer Bruce Dickinson recalled how he personally flew Royal Air Force pilots home from Afghanistan to RAF Wittering in 2008, taking control of a Boeing 747 chartered by the Ministry of Defence to transport RAF pilots back to the U.K. He said (as transcribed by BLABBERMOUTH.NET): "One of the jobs that we had at the airline I worked for, we had an airplane permanently allocated to the military to go and take people places — not to wars, but we'd take them to bases. And sometimes we flew people back. And sometimes we flew people back who had been in Afghanistan, for example, been in a war. They would go somewhere for two or three weeks to try and readjust and then we'd take them back. And one particular flight, we were the flying the Royal Air Force Regiment, which is RAF boots on the ground, soldiers. And they'd been to Afghanistan. It was an unusual flight 'cause we were returning them to their actual home base — not to a military airfield and then they get on a coach and they go back to their barracks. Where they were based had a runway, and we were told to go direct there. They had taken some casualties and they had lost some people. But they were all really cheerful; the best passengers you could ever have in the military — I mean, seriously… And we flew them into a place called the RAF Wittering, which is where they invented the Harrier Jump Jet. So, as we were coming in to land, we stopped and we blew the reverse thrust. And I had a female co-pilot, first officer. And we were looking out, and all really close to the runway were families, kids, all the families and wives and everybody of all the soldiers, and they were all [holding signs saying], 'You're my hero, daddy' and everything else. I mean, it was very emotional. And we actually had to stop the airplane 'cause my co-pilot was welling up and so was I. We were both trying not to [cry]. I went, 'Okay, we're gonna stop. We're gonna blow our noses, make sure we can fucking see where we're going and then do the job. 'Cause this is really exceptional.' The last thing you wanna do is go, 'It was so emotional, we ended up in a fucking ditch.' So, we dropped them off and that was it. So that was one of the more memorable flights — the sort of thing we used to do."

Two years ago, Dickinson was officially attested into the Royal Air Force, the United Kingdom's aerial warfare force. The British singer was awarded the role of Honorary Group Captain.

Bruce has held a commercial pilot's license for more than 20 years.

Dickinson had other connections with the RAF, having completed an emergency landing at RAF Halton in 2015. He was flying his Fokker triplane when it began to run low on fuel.

Last month, Bruce, who flew his group around the world in their customized jumbo jet dubbed Ed Force One, named after MAIDEN's iconic mascot Eddie, told the Associated Press that he will not be sitting in the pilot's seat when he and his bandmates return to the road later this year. "Oh, no, no, no, no," he said. "We're going to be flying and I'm going to be in the back. Hey, look, I'm 63 — I'm 64 in August. You know, when you get to 65, if you're an airline pilot, they just take you out the back and shoot, right? So, I'm going to be sitting in the back being the backseat driver."

According to the Federal Aviation Administration (FAA) and the International Civil Aviation Organization (ICAO),commercial pilots have to retire at age 65. There is currently no maximum age limit for being a private pilot or for being an Air Force pilot.

Dickinson gained a commercial pilot's license after learning to fly in the 1990s. In 2012 he set up Cardiff Aviation, an aircraft maintenance company which has since changed its name to Caerdav.

Bruce, who spent a few years flying planes for Astraeus Airlines, told CNN in a 2007 interview: "Aviation's been kicking around my family for as long as I can remember; my uncle was in the RAF. But I always thought I was too stupid. I was useless at maths and majored in history at university, so I thought history majors don't become pilots, let alone rock stars. And then our drummer learned to fly, so I said, 'If a drummer can learn to fly, then anyone can.'"

Dickinson told Wales Online that he still gets a thrill out of flying, but that it's a totally different sensation to playing live.

"The satisfaction flying airplanes is getting the job done, but the satisfaction with playing live is external, looking out at all the people looking at you," he said. "With an airliner, it's all internal. If you've got passengers, nobody goes, 'Wow! Wasn't that great?' They're thinking about the rest of their day. Your job as an airline pilot is to deliver them safely and be invisible. That's quite nice for me because it's completely the opposite to what I do when I sing."