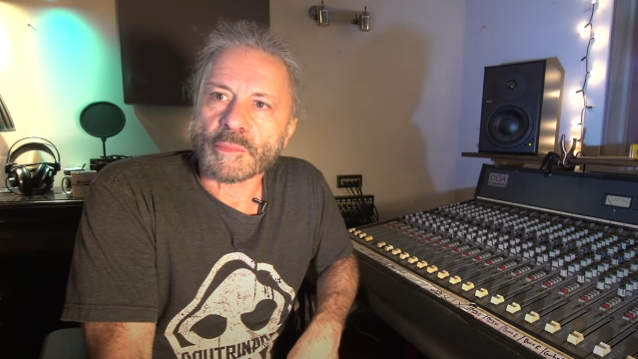 A new four-minute video in which IRON MAIDEN singer Bruce Dickinson discusses the making of the band's upcoming 17th studio album, "Senjutsu" can be seen below.

"It was just under two years ago when we finished this album," he said (as transcribed by BLABBERMOUTH.NET). "How nuts is that?

"The album itself… Steve [Harris, bass] came up with a lot of stuff that he was… He buried himself away and then would say, 'This is about that. Here's the song.' Adrian [Smith, guitar] and I wrote a couple of things — three things, actually — one of which turned out to be the first track, for which there is the video, obviously. And we wrote those sort of the way we normally wrote them, except instead of writing them in somebody's bathroom or at somebody's house, we were just in the studio, on our own, him with a guitar, me singing away, trying out some melodies and me going, 'Hmm, I think I can see what this might be all about.'"

Dickinson also spoke in more detail about the songwriting process, saying: "Actually, the love for creating things is the only thing that gets me in the studio. I basically don't like studios. They're nice to sit around and drink coffee, but unless there's something creative going on, they're sort of dead. It's the creativity that brings everything in the studio to life, and then it's animating the creativity and recording it. So that's the bit that gets me. Now, the bit that I really love is when you hear something that inspires you — a guitar riff, whatever it is — it suggests a melody, and from that melody we then write a verse and a bridge, and suddenly we're searching for what you might call a chorus, what you might call a hook — whatever — and it arrives. Bingo. 'Woah! Yeah, yeah, yeah.' And that, for me, is the 'come to Jesus' moment — it's, like, 'Yes!' And I love those moments. There's nuggets like that in every aspect of anything creative — whether it's doing a movie, whether it's doing a video, whatever it is — there's something in there, there's a moment where you go, 'Brilliant. This is what makes it different. This is what makes it work.'"

Regarding the overall musical direction of MAIDEN's new LP, Bruce said: "So I listened to it after it'd been mastered and then got a copy on my laptop so I could listen to it at home. And I thought, 'This is really bloody good.' And there's some stuff on it that is gonna absolutely blow people's minds. I mean, there's stuff on there that you go, 'Hang on a minute. Is that THE MOODY BLUES suddenly crashing into an IRON MAIDEN album.' Honestly, there's some really, really cool bits. So I don't think MAIDEN fans are gonna be disappointed. And even people who are not MAIDEN fans might be surprised by one or two things they might like. I really think it's a cool album. And Nicko's [McBrain] drums on it are sensational, actually, as well, I have to say."

BMG will release "Senjutsu", IRON MAIDEN's first album in six years, on September 3. It was recorded in Paris with longstanding producer Kevin Shirley and co-produced by Harris. It was preceded on July 15 by an already highly acclaimed animated video for the first single "The Writing On The Wall" made by BlinkInk based on a concept by Dickinson with two former Pixar executives. It followed a month-long teaser campaign and global "treasure hunt" for clues about the track title and concept.

For "Senjutsu" — loosely translated as "tactics and strategy" — the band once again enlisted the services of Mark Wilkinson to create the spectacular Samurai themed cover artwork, based on an idea by Harris. With a running time of a little under 82 minutes, "Senjutsu", like their previous record "The Book Of Souls", will be a double CD/Triple vinyl album.