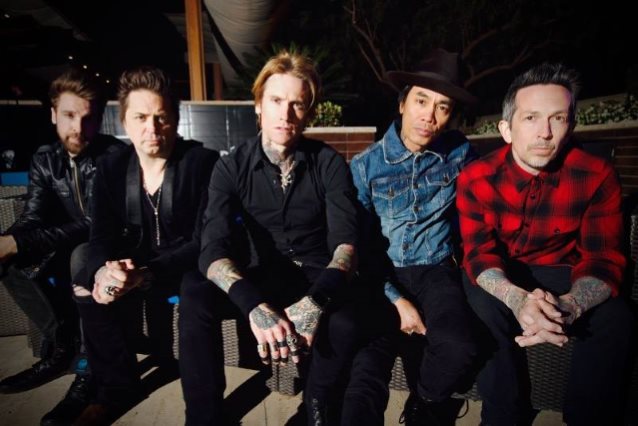 Guitarist Stevie Dacanay (a.k.a. Stevie D.) of Californian rockers BUCKCHERRY spoke to Legendary Rock Interviews about the recent departures of guitarist Keith Nelson and drummer Xavier Muriel. He said: "We already had some shows booked between now and the end of the year. A couple months ago, I got a call from Josh [Todd, BUCKCHERRY singer] saying that Keith is not going to be playing those shows. Then I got an email from X saying he wasn't going to be joining us for those shows either. So as to why, you are probably going to have to ask them. So, what I had to do was find a couple guys to do the shows. JOSH TODD & THE CONFLICT [Stevie and Josh's new project] was already going on, so I just asked Sean Winchester if he would be interested in learning ninety minutes of BUCKCHERRY songs [laughs] because his drums are already set up in the studio. For guitar, we could have asked anybody, but what I wanted to do was get a guy in there that I knew that we could already get along with and be comfortable with. So, we asked our longtime, dear friend Kevin Roentgen. He was in a band back in the day signed to Elektra Records, a band called SOUL, and later on after that he was in another band on the Wind-Up Records label called AMERICAN PEARL. He's been carrying the rock and roll torch here in Los Angeles for years and years. We all go back a long way. Myself, Kelly, Josh and Kevin all used to drink together back in the early '90s. So it just made sense for us to ask him to lend a helping hand."

The new lineup of BUCKCHERRY made its live debut on April 28 at the Rock Into Spring festival in Las Vegas, Nevada. Stevie said: "The band slayed! I love and miss the other guys, but the band has never sounded better."

Stevie also talked about the negative feedback BUCKCHERRY has received from some of its fans for making the latest lineup changes. He said: "Look, I see what's going on online. There is a small percentage of people that are really upset, and you know what? I get it! If the 'Ankh Warrior' [Vinnie Vincent] was replacing the 'Spaceman' [Ace Frehley in KISS], I'm sure that would have upset me back then. You know what I mean? So, I get it. I am glad people have connected with the band. This was beyond my control. It was either stop playing or keep going… and I love music."

BUCKCHERRY's latest album "Rock 'N' Roll", was re-released in January 2016 via F-Bomb/Caroline. The deluxe edition featured the record's original track list as well as a new version of "The Feeling Never Dies", a brand new song titled "Getting Started" and a B-side called "Cannonball".

Photo of BUCKCHERRY's 2017 lineup courtesy of the band's Facebook page