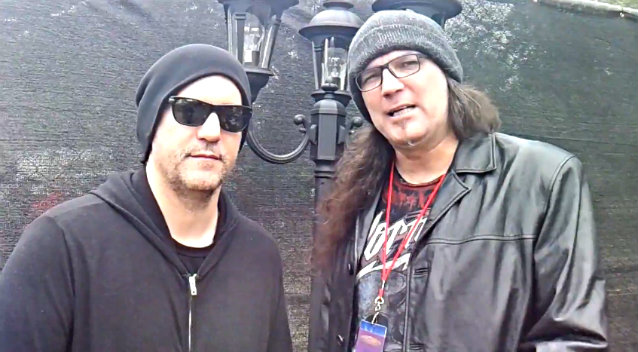 BUCKCHERRY Is Working On Ideas For Next Studio Album

SROMaginc.com conducted an interview with BUCKCHERRY guitarist Keith Nelson at the inaugural installment of the Louder Than Life festival, which was held on Saturday, October 4 and Sunday, October 5 at Louisville Champions Park in Louisville, Kentucky. You can now watch the chat below.

BUCKCHERRY in August released a new EP, simply titled "Fuck", via the band's newly established F Bomb imprint. Each of the six songs on the disc has the F-word in the title, including "Somebody Fucked With Me", "I Don't Give A Fuck" and the first single, a cover of Icona Pop's hit "I Love It", re-imagined as "Say Fuck It".

Asked how the idea for the "Fuck" EP came about, Nelson said: "It's basically five dudes on a tour bus going, 'Wouldn't it be cool if we had a record called 'Fuck'?' Hahaha. And then it was, like, 'Wait a second. Let's do a record called 'Fuck' and put 'fuck' in every song. We wrote a bunch of songs that didn't have 'fuck' in it, and they're just sitting around."

He added: "We're already working on the next record on our little breaks from the road, and we're getting together ideas out there, so you'll hear something next year."

BUCKCHERRY frontman Josh Todd said in a recent interview with Yahoo! Music that "Fuck" is "not just some silly rock record," adding, "It's not about offending anybody as much as celebrating the word. There are so many ways to use the word. We wanted to capture that on an EP and not hold back or censor anything."