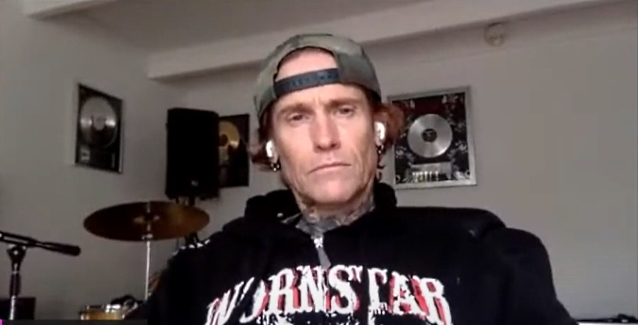 In a brand new interview with Jon Beatty of the "BREWtally Speaking Podcast", BUCKCHERRY singer Josh Todd discussed the fact that many major airlines still have policies and guidelines in place to keep COVID-19 transmission risk as low as possible by mandating wearing masks in all of its facilities, regardless of vaccination status.

"I started masking on airplanes way before COVID, because whenever I was on a plane for more than five hours, like when I go to Europe and stuff, three days later, I'd get sick from the plane — the recycled air, and everybody's in there coughing," he said (as transcribed by BLABBERMOUTH.NET). "And I'm, like, 'Fuck this, man. I'm never doing that again. I don't care if I've gotta wear a mask for 12 hours on a plane.' And I started doing it, and the results were amazing.

"At one point we went to… We had this run where it was Australia [and] Japan," he continued. "And it was 35,000 miles in the air in two weeks. So that's how much we are in planes. So I masked the whole time, and the [rest of the] band didn't, and every one of those guys got this weird cough that lasted fucking six weeks. And they're convinced that they had COVID back — this was right before COVID hit. And I masked, and I was fine. So I'm never going back to not masking on a plane, I'll tell you that."

Elsewhere in the chat, Josh confirmed that he has received the Moderna COVID-19 vaccine. "I did it for the greater good," he said. "I wanna do my part. I also wanna get out there and work. I wanna be able to go everywhere —whatever that means, I wanna do it. And I also wanna do it for people other than myself."