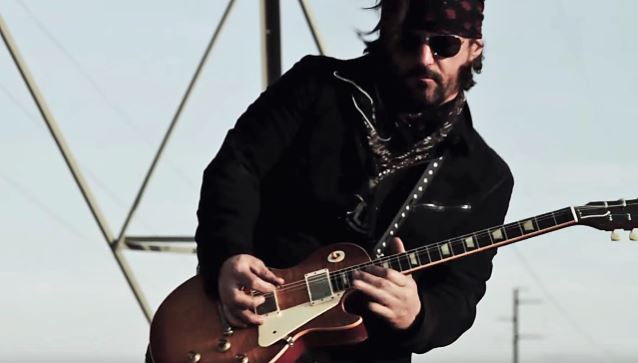 BUCKCHERRY's KEITH NELSON: Rock And Roll 'Is Alive And Well'

On the writing process for BUCKCHERRY's seventh studio album, "Rock 'N' Roll", which was released on August 21 via F-Bomb Records/Caroline:

"We did the 'Confessions' record [in 2013], we had a theme. And then we did the 'Fuck' EP [in 2014], and that had a theme. And we just kind of wanted to… 'Let's just drop all of that stuff.' 'Cause we had written two bodies of work where it was kind of predetermined. 'Let's just write songs like we used to.' So we started writing songs, and the process was, really, the same. It only took us three weeks to record the record. We just wrote songs, made demos, got the band together, played them live, worked them up, and then hit 'record.' It's really kind of simple thing. We didn't come up with a title until after the fact. And I think it kind of speaks for itself."

"There's been a lot of people that have been going around lately saying 'rock and roll is dead.' I mean, if you look at the way records sell, unless you're a pop artist, or a hip-hop artist, rock is dead. But we just don't believe that, man. We go out every night, we play to a nice full house full of rock fans. And I think it's alive and well."

On rock albums having a shorter shelf life than ever before:

"The attention span [of music fans] is so short — it's so short. That's one of the reasons why we've been trying to turn around new records more frequently — just because the attention span is short. You used to work three singles, and if you were really having some success, you'd work four. Now it's, like, you might work the second one, but that's kind of it. I don't know… I'm not gonna complain about the changing of the guard or the way music consumers are getting their music, but I do wish that records would stick around a little bit longer."

"We definitely feel, and are very well aware of the fact, that the timing couldn't have been better, even though we didn't even know it at the time. Because looking at what happened after the fact, it's just insane the way it kind of dropped off… just the business changed in the next two years in such a ridiculous way. So we're really aware of the fact that if we had released that record two years later, it would not have had the shelf life or the success that it had."

On whether we will ever see another rock band have a platinum album again:

"I don't know if we are. Now they have to come up with a new way by arriving at that award status by factoring in streams and other ways of getting the music. But just out and out selling a whole record, you know… That's why we keep making records, even though everyone's talking about going to singles and stuff like that. I mean, I just love the idea… And it's because all my favorite artists, all the music I grew up on, were complete records. And maybe there was a couple of songs there that you didn't like. But, you know, the whole body of work together, I just love that. And it feels like we have been able to just eke out the last of that."