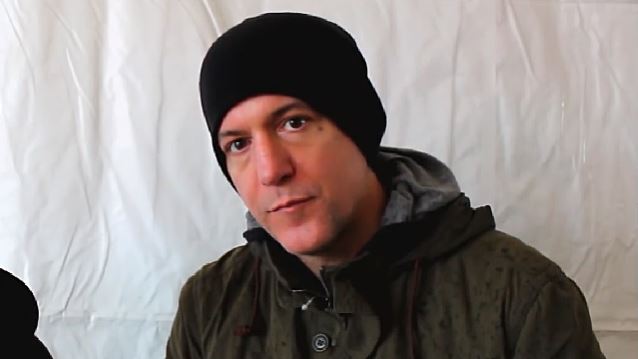 BUCKCHERRY guitarist Keith Nelson has slammed Irish rock giants U2 for giving their music away for free and "tell[ing] people that their music isn't worth anything."

U2 stunned the music world last week by delivering a surprise album at Apple's iPhone 6 unveiling and making it available to a half-billion iTunes users for free. 33 million of those iTunes account holders have accessed the free album, the company said on Monday.

Asked how he feels about free digital downloads and music piracy and all those issues that have affected music, Nelson told Northwest Music Scene in an interview conducted on September 12: "I think music has been devalued in the eyes of the consumer, to the point now where a band like U2 decides to just give its music away and basically tell people that their music isn't worth anything, it should be treated like something free, and that's a bummer because I know what it takes to make a record, I know what it takes to write a meaningful record full of songs, and get it into the consumers' hands, and to me music still has a value, so it's definitely something that I still struggle with."

Nelson went on to call U2's decision to give away the "Songs Of Innocence" album "crazy," adding that "I'm sure the band got paid, so they made their money, but they've sent a message to everyone that music is free, and that's disturbing. It's easy to do that when you're a multi-millionaire-billionaire and money isn't really something that you worry about, but when you're a working rock and roll band and you count on every dollar, it's disappointing to see someone do that. I don't really like the message that it sends that music is free."

In a 2009 interview with AltSounds, Nelson lamented the decline of the album and the rise of music downloading. He said: "It's unfortunate that right now in the business of making music it seems like the record as we know it, the compact disc, whatever you want to call it, the recorded body of work, seems to mean less and less to people on a business side, because the big companies are having a hard time profiting off of it like they used to, so all that is really left is the live show. I think that illegal downloading is unfortunate and is a bit of a ripoff to the artist and the record company, and what it's done is created an environment that has made the live concert experience that much more valuable. I'm lucky enough to be in a band that excels at the live concert experience, so it's a double-edged sword."