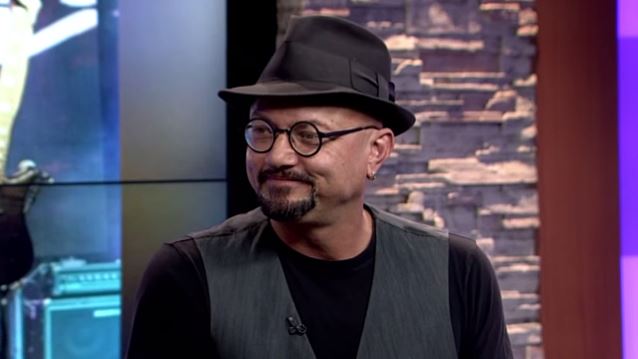 Former QUEENSRŸCHE singer Geoff Tate says that the upcoming progressive rock trilogy from his new band OPERATION: MINDCRIME will be "very complex" with "a very melodic content" and urges his fans to experience it "one on one" when it is released early next year.

OPERATION: MINDCRIME is scheduled to enter the studio this month to begin recording the trilogy project, which Geoff has been working on for the past two years.

"It's a grim story that takes place in different locations around the world," Tate tells Albuquerque Journal. "The music reflects these places in the world, including Asia, South America and Europe. There are elements of those places in the music.

Regarding the musical direction of the OPERATION: MINDCRIME debut, Tate says: "It's very complex. My focus is telling the story and inventing melodies. … It has a very melodic content."

He adds: "I'm always kind of reluctant to describe music. One person's heavy is another person's light. It's always a puzzle to put into words. It's best experienced one on one."

Tate previously told the San Antonio Metal Music Examiner about his upcoming trilogy: "I've been working on it for a couple of years now, and it's pretty far along, very developed. There's a story line that spreads out over three records; thus, we have a trilogy. And it's a very in-depth story, kind of like a mystery, in a sense. It's very, very much a progressive album; there's lots of notes [laughs] and lots of interesting time-signature changes. From a muso standpoint, it's gonna be the most interesting thing I've ever done. There's a lot of no holds barred, a lot of non-conforming to the past. Since the past is over, we're all kind of looking forward to the now and what we're doing next. So we've kind of thrown off a lot of the things that go along with the past, like song structure and themes and things like that. We're taking this in a very different way."

Asked if he would describe his upcoming trilogy project as "Operation: Mindcrime" "on steroids," Tate said: "Well, I always hate to compare what I've done with what I'm doing now… It's very in-depth, and like 'Mindcrime', there's a lot of thought that goes into it. You have an outline and you have to write the story around the outline, and then you have to get very in-depth with the lyrics, of course, and then make sure that the melodies match up with the sentiment of what the lyrics are about. Then you've got the song structure itself — how do you present this idea the best way you can? There's a lot of thought that goes into it. Then you've gotta tie it all together so that it follows some sort of linear path and it doesn't lose your audience along the way. And you have to make it interesting, something that people will want to listen to over and over again rather than just putting it on once and going, 'Oh, I've got that.' I try to stay away from that kind of thing."