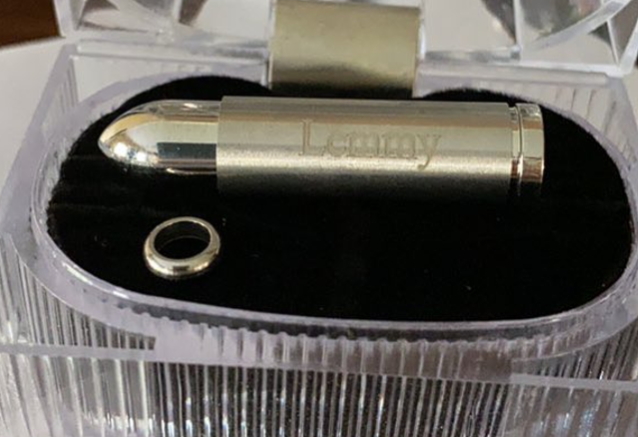 Former "Headbangers Ball" host Riki Rachtman spoke with Elliott Fullam of Little Punk People yesterday about his new Gimme Metal TV show called "The Ball" and he also went into more detail about his Lemmy bullet that he received as a personal gift.

He said (as transcribed by BLABBERMOUTH.NET): "I love MOTÖRHEAD. MOTÖRHEAD was a band that I was a huge fan of before I ever met Lemmy. When I was [very young], I liked MOTÖRHEAD, and they never, ever became a band that I was bored with; I always liked them. And then through [my Hollywood club] the Cathouse, I became friends with Lemmy, and then through MTV, I became better friends with Lemmy. He'd come to my house when I'd have barbecues, and he played my birthday party. And whenever I needed MOTÖRHEAD to do something at the Cathouse, Lemmy was always there. And he was just a very, very kind person and cool. I mean, he's Lemmy."

He continued: "I'd talk to [Lemmy's] manager once in a while, Todd Singerman — he's such a great guy — and Todd says to me, 'Hey, MOTÖRHEAD's got something for you. Lemmy's got something for you that's personal. What's the best address to send it. So I'm thinking they're gonna send an album or something. I've got a lot of stuff.

"Lemmy was one of a few guys that him and Todd always used to wish me happy birthday. I have this 'Happy Birthday' thing from the city of Los Angeles that they sent me. They were always so good to me.

"And so I didn't know what it was. So I get it in the mail, and I'm opening the box, and it doesn't say who it's from. And I'm, like, 'I don't know what this is.' And I open the box, and I take out this little plastic thing, and there's a bullet in it. And I was, like, 'Wow. That's kind of cool.' And the bullet says 'Lemmy'. So I open this up, and this bullet says 'Lemmy' on it. So I'm holding it. And I [tell my girlfriend], 'Look how cool this is. This is a bullet.' I wondered maybe this was from Lemmy's belt or something like this.

"So I got this letter from MOTÖRHEAD, and I'm reading it. And it says that when Lemmy died, he wanted his ashes to be put in bullets and given out to his close personal friends," Riki added. "And when I read that, my eyes started getting really, really teary eyed. And I showed it to my girlfriend, and she started getting teary eyed.

"It is the greatest gift I've ever received in my life. It is, without a doubt, my prized possession. I'm getting it made into a necklace so I can keep it on me everywhere I go.

"When we did the Cathouse 30th anniversary, we did a tribute to MOTÖRHEAD, and we had a bunch of guys playing MOTÖRHEAD songs. And to know that Lemmy said that and gave that was very, very touching, and it means a lot to me."

Rachtman's bullet is not the only one whose existence has been publicly revealed. Last year, tennis player Pat Cash shared a photo of another Lemmy bullet, saying it had been gifted to UGLY KID JOE singer Whitfield Crane.

Before his death #Lemmy asked for his ashes to be put in some bullets & handed out to his closest friends Today I received a bullet & was literally brought to tears Thank you @myMotorheadpic.twitter.com/gnI9aWe4iU