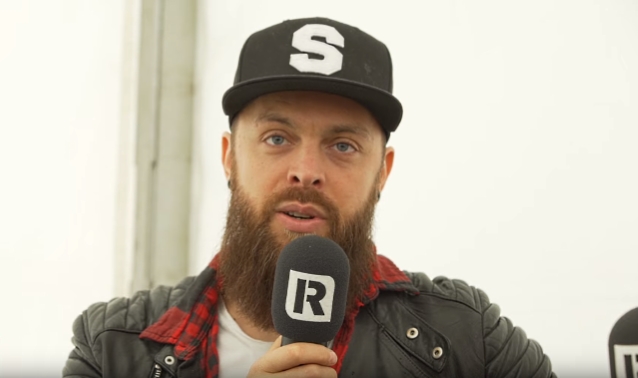 BULLET FOR MY VALENTINE frontman Matt Tuck has confirmed to Rock Sound that the band has begun work on material for the follow-up to last year's "Gravity" album. "We've already got eight new tracks, so we've been busy behind the scenes when we've not been touring the last few months," he said (see video below). "And it feels really good."

As for the musical direction of the new BULLET FOR MY VALENTINE songs, Tuck said: "It wasn't our gameplan at the time, but when we were making ['Gravity'], the process behind it was, if we do do a record like this, the next one' — forward thinking — it opens the door to just do whatever the hell we want again. And instantly, it has.

"All indicators are pointing towards ferocious heaviness," he continued. "So, I don't know… Maybe it was just something we needed to get out of our system to come back to the more traditional way of writing a BULLET record. It's weird how these things work out. But all signs initially are pointing to a far more aggressive, gnarly, riff-based record."

Asked when fans should expect to see some new music from BULLET FOR MY VALENTINE, Tuck said: "We're probably gonna aim for a '21 release. We wanna take our time on this. We wanna work with people that we really wanna work with, and we may have to wait, depending on their schedules — et cetera, et cetera — so we think '21 is a safe bet, to give us the time to do what we want, how we wanna do it, and not be rushed or forced into anything."

"Gravity" was issued in June 2018. The effort was made available through BULLET FOR MY VALENTINE's new label home, Search And Destroy, the imprint launched in 2014 by Spinefarm and international artist management company Raw Power Management.

Last summer, Tuck defended BULLET FOR MY VALENTINE's decision to add more electronic elements to its distinct signature sound on "Gravity", telling Full Metal Jackie's nationally syndicated radio show: "Well, this is album number six. We've been around a long time now; we've had five previous records. And we've kind of stuck to a certain way of writing, a certain sound and formula for many years now, and we just felt that the time was right to add different colors, sounds and elements and diversity to our sound and our songwriting abilities. It was just something that we've never really done in the past; we've dabbled on it slightly on a couple songs on 'Venom'. So we knew that, if done right, it's a very powerful way of enhancing the feel of a song, just like movie soundtrack stuff."