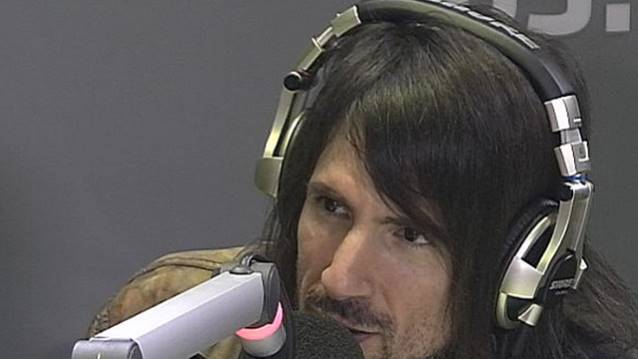 GUNS N' ROSES guitarist Ron "Bumblefoot" Thal spoke to Argentina's Vorterix prior to his November 24 appearance at The Roxy Palermo in Buenos Aires. A few excerpts from the chat follow below (transcribed by BLABBERMOUTH.NET).

On recurrecting his solo career:

Bumblefoot: "Before GUNS, I was touring all the time, doing my own stuff, putting out my own albums, doing all kinds of things. And then once GUNS got busy with all the touring, it slowly… there were too many conflicts with the schedule and everything else that I did in my life slowly sort of fell to the side until it reached a point that I just was not really putting anything into it. And in the second half of this year, GUNS kind of went into hibernation — as sometimes happens — and I was, like, 'You know what? I've gotta get back on the horse. I've gotta start doing my thing again and becoming me again.' And I started doing a lot of clinics and master classes and jamming and just going all over the world, jamming with local musicians and doing shows. And that is what brings me here this evening."

Bumblefoot: "The future is completely unpredictable; you all should know that. It's just trying to say, 'Alright, what direction is the tornado gonna turn?' Anything can be. I'm sure that 2014… Actually, I shouldn't say 'sure,' because it's unpredictable. But I can assume, but when we assume, we make an ass out of… Probably there will be some shows in the future, and I'm hoping that there will be some completed recordings in the future. I would like to see the band write as a band from the ground up and put some music out there. I've been saying for years that we shouldn't even tackle an entire album because it's too big a bite to take. It's too much — it takes too much time, too much of an investment of life that just doesn't exist. Not in this day and age, and not where things are with the band. We'd be better off just doing a song at a time and putting that out. What I've always wanted to do was, before each time we go out and do a leg of touring, that we get together for a week in the studio, we write a song, we finish that song no matter what it takes, we finish it and we put it out and we play it on that leg, we give it to radio. Every single time we go out and play, we have a new song that we're doing. And if we did that, it would be an album worth of material done that would be done by this band right now. Yeah, if I was master of the universe, that's what would have happened. I mean, you're dealing with seven other people and everybody's gotta be on board and everyone has to agree on a strategy. And it has to coincide with any existing, or preexisting business agreements that are there as well. I mean, it's complicated."

Bumblefoot: "I think I've been a much bigger pain in the ass to Axl than he's been to me. That's for sure.

"I am very honest and probably honest when I shouldn't be. Kind of like when you should say nothing and be silent, instead of being silent, I'll [say something] usually on the radio. And he'll get a hundred e-mails about it. Or probably just hear from everyone else.

"I think he kind of, in a weird way, probably likes that I am a pain in the ass. Because even in the beginning, when we had the big management fight, before joining the band, I remember hanging out with him and he liked the fact that I went after his team of lawyers that the manager sent after me to try to take me down, and I just came out swinging at them. And I remember he said to me, we were hanging out one time, he was, like, 'Your balls, when they touch, they go, 'Clang.''

"But he knows what he's gonna get with me. I'm not gonna give him lip service and be dishonest. If he asks me something, I'm gonna tell him [what I think]. And he's a human being. He's like everyone else.

Bumblefoot: "Yeah, I'm aware that some stuff did leak.

"You know what? Here's the problem. And this is why I say that I am also a bigger pain in the ass to Axl, because when it comes to something like this, when something leaks, that is an illegal activity which could possibly, depending, lead to legal [issues], in which anything I say could be used against [us]. So when something leaks, it's very important to say nothing because it could affect legal issues, and it's better not to talk about that. But I tend to talk…

"Here's the thing: Before 'Chinese Democracy' came out, which, as we know, was exactly five years ago yesterday, I started working on an acoustic album called 'Barefoot' that I ended up releasing the following month, after 'Chinese' was released. So I have a little acoustic EP called 'Barefoot'. There was an additional song that I recorded on that album, along with everything else, where pretty much that album, it was just two guitar tracks, maybe some bass in the background and vocals; it was very raw — just acoustic guitar, acoustic lead guitar, vocals. I did it all myself. While I was at it, I kind of recorded an extra song. From what I understand… yeah… So, anyway, if you listen to the 'Barefoot' album, you might notice a similarity in tone and playing and everything to other acoustic songs that might have escaped the… Yeah. But I don't know anything about anything."

On whether he gets along with former members of GUNS N ' ROSES:

Bumblefoot: "GUNS N' ROSES, it's like a life that has different chapters. And there are different people in those chapters, and I'm in one of those chapters and those [other] guys were in a chapter, and we're all part of the big book, we're all part of the big book of GUNS. And it's cool. I'm in touch with a bunch of the guys and stuff, and everybody's cool with each other. Really, the ones that I'll reach out to and shoot an e-mail to and say 'hi' to are Duff [McKagan] and Gilby [Clarke].

"I think people want us to be these superheroes and villains and good-versus-evil and these wrestling characters of good guys and bad guys, but we're all musicians. And it's not the thing that separates us, it's the thing that we have in common. It's, like, we all played in the same band. And sometimes at the same time. Sometimes Izzy [Stradlin] joins us on stage, sometimes Duff. It's great. Then afterwards, we all go to dinner. And once in a while, our wives are talking and stuff. And it's all good. Everybody's cool."

On whether he is in touch with Slash:

Bumblefoot: "That one I steer clear of. Simply because there's such a heated relationship between Axl and Slash. I don't want Axl to feel betrayed if I'm… I think it would bother him if… [Slash and I] have a lot of mutual friends, though.

"[Slash and I] almost were in a situation when we might be on the same stage together in Las Vegas in July. I was playing with the bass player from PANTERA, Rex Brown, and Brian Tichy on drums, who had played with Slash, and we were doing a bunch of KISS covers in Vegas, just having fun. And it was the same night that Slash was doing his final show of his fun and he was in Vegas. Yeah, we were just playing not far from there, and there was talk that he was gonna come and play on stage. And I was, like, 'Hmmm….'

"Because, for me, I don't have problems with anybody… Although I do have a couple of problems with Mr. Adler. 'Cause he tends to say some nasty things about the current band, and then I say some things back, and then he apologizes, and we make nice, and I talk to him, and then he says it again, he says something bad again. Steven, stop it! But even him, if I saw him, I'd give him a big, old hug. I'd tell him what a pain in my ass he is and then I'd give him a hug.

"But there was talk leading up to that night, there were a lot of texts going back and forth between Slash and the guys I was with doing the KISS stuff about him coming and joining on stage for a song. And I'm, like, I don't wanna be rude and step down, because that's just, like, insulting. If he gets on stage, like, 'Alright, you play,' and I'm walking off. But then if I do it, it's, like, that's kind of not cool at all to Axl, 'cause I know that he would feel really… So I was, like, 'Ahhh..what to do.' So there was just a lot of inter-texting and stuff, just kind of feeling it out with the guys on my end. It turned out that [Slash] had to grab a flight to Europe early the next morning, so he wasn't coming at the last minute, it wasn't happening.

"I mean, I wasn't that worried about it, because I'm just like, 'You know what?! Whatever is gonna happen is gonna happen.' You've just gotta kind of trust your gut in situations. And honestly, no matter what, the world is not gonna crumble. It's a bunch of musicians jamming and having fun. Ultimately, that's all it's about."