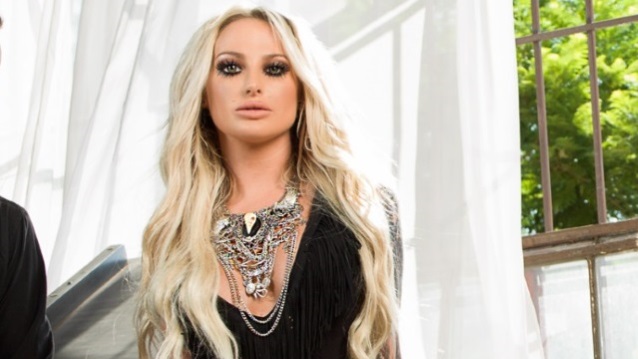 BUTCHER BABIES frontwoman Heidi Shepherd feels people still "oversexualize" her band even as they make attempts at refining their image and sound with their new album, "Lilith". Her comments stem from the ongoing debate over the band's early onstage image, which found Shepherd and co-frontwoman Carla Harvey wearing nothing more than pieces of tape to cover their breasts, a move that helped gain BUTCHER BABIES attention, but also drew condemnation from various segments of the metal and hard rock scene.

In an interview (hear audio below) with Cutter of Razor 94.7 FM after their October 22 appearance at the Aftershock festival, which was held at Discovery Park in Sacramento, California, Shepherd, along with Harvey and guitarist Henry Flury, were asked to describe "Lilith" and the creative process behind it.

"This is definitely an album that we have put a lot more time and energy into," said Henry. "We took a year off from touring and we really sat down, and we have a new drummer, our drummer Chase [Brickenden], who brought a lot more to the table, playing-wise. He's a great, great drummer and it was just a completely different experience with him. So we took a step back and we just started writing with him and one thing about this album is, each song is very unique. They're all very, very, very different. And we wanted to create a very live, raw-sounding album. We worked with Steve Evetts [THE DILLINGER ESCAPE PLAN, SEPULTURA], the producer, on this album. When you listen to his albums, just like sonically, when you close your eyes, it sounds like you're listening to a band play right in front of you and that's what we wanted on this album. That's exactly what we got."

"Also for this album, with us, it really was kind of a rebirth," added Heidi. "Like he said, we took a year off from touring, which we had never done. The albums prior to that were written on the road, everything was written on the road, well, besides a little bit of our first album was written when we were kids. For this one, it was really cool to take a step back, get in a room with all five members and jam it out for a year. [Laughs] A year! To write and record, it took a year. Another thing as well, when we first started, we started as an ode to Wendy O. Williams and the PLASMATICS. She was basically the first female in heavy metal giving the middle finger to the air, don't tell me who to be, what to look like, blah, blah, blah. And that's where the name BUTCHER BABIES came from, our original attire and with the [breast] tape and everything, but people tend to oversexualize us, still, even though that's been six, seven years ago..."

Shepherd went on to detail how BUTCHER BABIES are purposely avoiding topics the band feels to be predictable based on their image and persona. "For us, people just look at us and think… it's stupid, it really is," she said. "At the same time, a while ago, we decided we weren't going to write about anything sexual, ever. If you look at our back catalog, there's nothing sexy about any of the songs, we've never written anything in that vein. One thing we wanted to do with this album is strip ourselves of that pigeonhole because we are tired of allowing the media or anyone else to determine what we can and can't write about because of what they think about us. It's just so silly. As we've become women, we decided to really write about that natural human instinct, that natural feeling that every single person goes through, the sexuality, the sensuality, everything. You can hear that in songs like 'Headspin' or 'The Huntsman' or even 'Lilith'. We played 'Lilith' today and 'Headspin' is our new single and to us, it was very liberating to strip ourselves of that pigeonhole and say, 'You know what? I don't care what anyone thinks. I don't care if they look at us and go 'Of course they're going to write a song about sex.' It doesn't freaking matter, it doesn't, because to us, it's a natural thing. That was our kind of answer to coming back as a band, and that rebirth. We're not afraid of our sexuality, we're not afraid of what people think, we're not afraid of baring it all."

"Luckily over the years we've amassed this fanbase that is very accepting of everything that we do as a band," added Carla. "So we're able to dip into different styles on our album without fear of extreme backlash: 'That's not thrash metal BUTCHER BABIES that I like.' We're allowed to dip into other things we enjoy like '90s pop or riot grrrl music, funk, boogie type of music. We have a great boogie song on the album. And we can be free to write about topics that we didn't feel so free to write about — like Heidi was saying — a few years ago. We've amassed this fanbase who lets us be who we are and that's a huge gift."

"Lilith" was released October 27 via Century Media. BUTCHER BABIES is supporting HOLLYWOOD UNDEAD on a U.S. tour which kicked off on October 1 in Atlanta, Georgia.

Listen to "Rockcast at Aftershock - Butcher Babies" on Spreaker.