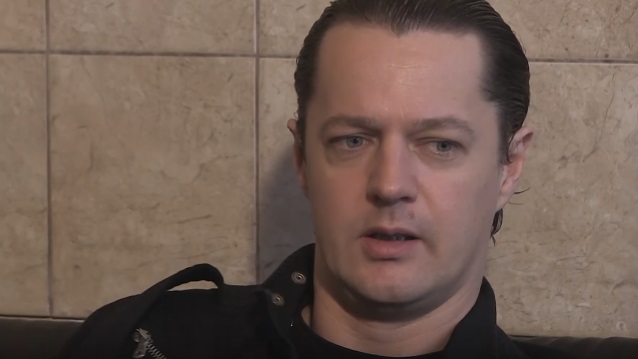 Poland's Inertia.pl conducted an interview with frontman Sigurd "Satyr" Wongraven of Norwegian black metallers SATYRICON prior to the band's October 15 show at Progresja in Warsaw, Poland. You can watch the entire chat below. A few excerpts follow (transcribed by BLABBERMOUTH.NET).

On whether the band's new "Deep Calleth Upon Deep" full-length album begins a new chapter for the band and is a "game-changer":

Satyr: "I don't know if it's a game-changer. What I've been saying all the way is that when I made the record, I didn't know whether it was going to be the last SATYRICON record and I still don't know that. But, what I always thought when making the record is that if it's the last one, it better be special. If it's not the last one, it should lead the way for SATYRICON into the next five, ten years, or something like that. These were my thoughts when I was making it. That's why the record is the way it is."

On the song "To Your Brethren In The Dark":

Satyr: "'To Your Brethren In The Dark' is almost like a SATYRICON 'signature' song I would say. Melodically speaking, see, basically, back in the early '90s, there were, I think, every band in Norway wanted to not only just be a good band, but to be a band that had something which was unique for your band. So, in the case of SATYRICON, I thought that maybe one of the things that I could do was take my love for the tonality of traditional Norwegian folk music and incorporate this into black metal. 'To Your Brethren In The Dark', without a shadow of a doubt, has very strong tonality coming from Norwegian folk music. The first band to ever start to do this in black metal was SATYRICON, then it became a part of our identity. You can see it all the way through since 1993 up until this day. 'To Your Brethren In The Dark' is an example of the band's sound altogether regardless of which album it is from. For me, with 'Deep Calleth Upon Deep', it was never important it was going to be a revolution or anything like that. I had never said that it is and I don't think it is. What I have said is that it is very important for me that the album should have a spiritual presence, a strong spiritual presence and that it would have some kind of core quality that was beyond just being just a good record, that it was something more than just good music. There are many reasons for that, but that was the way that I thought when I made it."

On how "Deep Calleth Upon Deep" compares to previous SATYRICON albums:

Satyr: "To me, this is an album that speaks for itself. I think if I am to try and see a connection between this record and any other record, it would actually be the self-titled [album]. Because the album 'Satyricon' from 2013 was a departure from what we did in the 2000s. It was very different from 'The Age Of Nero' and 'Now, Diabolical' and 'Volcano'. That album, 'Satyricon', being the way it was, opened the door for 'Deep Calleth Upon Deep'. That's the way I see it."

On his process for writing songs and how he works with longtime SATYRICON drummer Kjetil-Vidar "Frost" Haraldstad:

Satyr: "The way that I work in the making of music is I don't really think so much about that it should to be one or several people's liking. I have a vision for the music and then typically, what musicians do is that they get very easily distracted. They start working on something, then they get a new idea, then they go here, another idea, they go there. What I try to do is, I search broadly and when I find something that I like, I pursue that with determination. The last thing that I think about is what other people think about it. This whole thing with… there isn't even a 50/50 [split] in SATYRICON. Basically, I make the songs and the lyrics and when I work together with Frost, together we try and find solutions that can refine my ideas, improve my ideas, make them better and certainly in his case, play his part as a drummer to help lift the quality of what I do."

Satyr: "'Rebel' was not only a game-changer for SATYRICON, but for the genre, I think. It was a time where everything [referring to black metal] was turning gothic. For us, it was very important to do something more contemporary, which didn't have anything to do with gothic. I think that was an influential album. 'Deep Calleth Upon Deep', is a very important record, because it's an album that, regardless if you like it or not, it has integrity, honesty and spirituality. These are core qualities in any good form of art and even more important in 2017 where even in metal, what is it that these records are for? They are so that bands can go on tour, so that they can make friends, so that they can be with girls, so that they can do drugs, so that their agents can make their commission on their shows, so that their managers can make commission on their shows and t-shirts. It's like a business. I can wholeheartedly say that what we have tried to do is something which is independent from all of that, which is just a work of art on its own, which is also something that doesn't have to be overly obvious."

"Deep Calleth Upon Deep" was released on September 22 via Napalm Records. The disc was recorded in Oslo, Norway and Vancouver, Canada, during early 2017 and mixed together with revered studio guru Mike Fraser (who previously worked on the band's "Now, Diabolical").