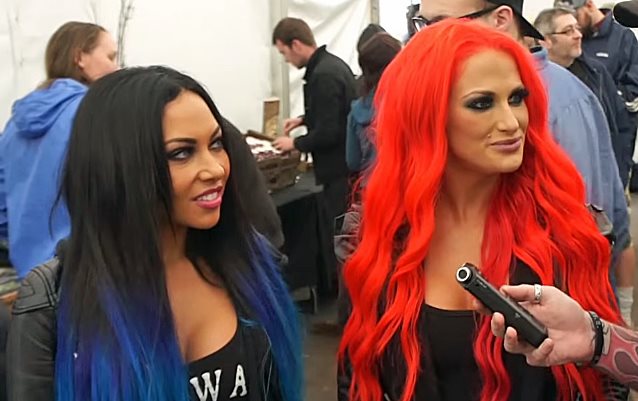 MikeJamesRockShow.com conducted an interview with BUTCHER BABIES frontwomen Heidi Shepherd and Carla Harvey at the 2015 edition of the U.K.'s Download festival, which was held last weekend in Donington Park. You can now watch the chat below. A couple of excerpts follow (transcribed by BLABBERMOUTH.NET).

On the songwriting process for BUTCHER BABIES' sophomore album, "Take It Like A Man", which is due on August 21 via Century Media:

Heidi: "We had to write a lot on the road, because we've been touring constantly, so a lot of the time, on off days, we would rent a rehearsal space in the city we had off, and we would set up all of our equipment and write the record. It ended up being really cool. I think we dove in and really pulled some crazy emotions that we kind of forgot we had — suppressed emotions, things that we hadn't really thought about in all the years, 'cause, like I said, they were suppressed. And we put it on the album. And it came across really raw and really emotional and honest and we're pretty pumped."

Carla: "Like she said, the album is great. We're really proud of it. We went back to our thrash metal roots on this album. 'Goliath', our last album, was a little bit more melodic than we started out, and we enjoyed writing that album, and I think it was what we needed to do at the time. But this album is so heavy and it's so raw… [There's] so much emotion. So we're really excited."

On whether the more aggressive musical direction of "Take It Like A Man" was influenced by the bands that BUTCHER BABIES have toured with in the past couple of years:

Heidi: "We always take influence from everyone you always tour with, play with… Everyone kind of watches each other and you respect different things about each band. But, for us, it was more so just going back to how we originally were. The very first single we ever released as a band, in 2010, was 'Blonde Girls All Look The Same', and that song was super thrashy. And we decided we wanted to kind of bring it back to that for this album, because that's originally who we were. Plus, after touring non-stop for four years, we realized that's what our fan base wants. They want that music that makes 'em move, that music that makes 'em feel something. And so, this album, we gave it to 'em. We even re-did 'Blonde Girls All Look The Same', so it's gonna be on the album. [It was] re-done completely."

Carla: [It's] a grown-up version. It's actually really cool to hear how much we've changed. You know, obviously, we've been a band for five years now, and if you don't grow as an artist in those five years, there's a problem. And so, listening to the two recordings back and back, you can really see that we've honed our strengths and our voices… It's so cool to see the difference that five years makes."

The first song to be released from "Take It Like A Man" is "Monsters Ball".

BUTCHER BABIES will join GWAR and BATTLECROSS for a North American tour from August 25 to September 18.