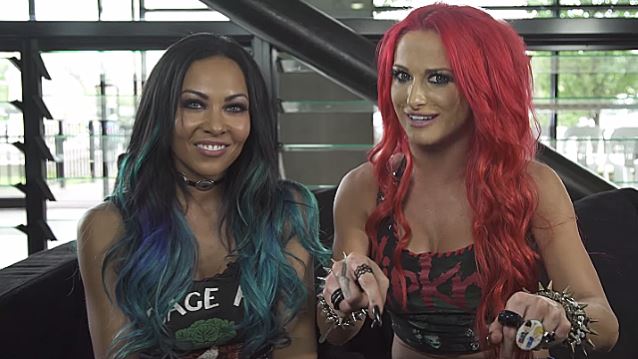 BUTCHER BABIES: 'We Want People To Either Really Love Us Or Really Hate Us'

Soundcrave Magazine's John Baxter conducted an interviw with Carla Harvey and Heidi Shepherd of BUTCHER BABIES before the band's April 10 concert at the Launchpad in Albuquerque, New Mexico. You can now listen to the chat below.

Asked about the misconception people have about BUTCHER BABIES' early look, which featured Harvey and Shepherd performing topless with nothing but nipple tape as an "homage" to Wendy O. Williams and THE PLASMATICS, Heidi said: "[That's] absolutely [what it is]. I mean, the anniversary of her death was just a couple of days ago."

Added Carla: "Even if you don't [know Wendy O. Williams], if you're a fan of the band and you've looked us up, you should know that that's… We say in interviews all the time, we've been saying it since the beginning of this band that that's where we came from. So I find it funny when people question that look."

"The way that we see it, we want people to either really love us or really hate us. One or the other. The in-betweeners… Whatever. They're not really making any waves. So people on both extremes, they're the ones getting people talking, so we're appreciative of both sides."

They will join up with IN THIS MOMENT on April 18 in Montclair, New Jersey for a massive, five-week North American tour with UPON A BURNING BODY and THE NEARLY DEADS.

BUTCHER BABIES' EP of cover tunes, "Uncovered", was released on September 30, 2014 in North America (October 6 in Europe) via Century Media.