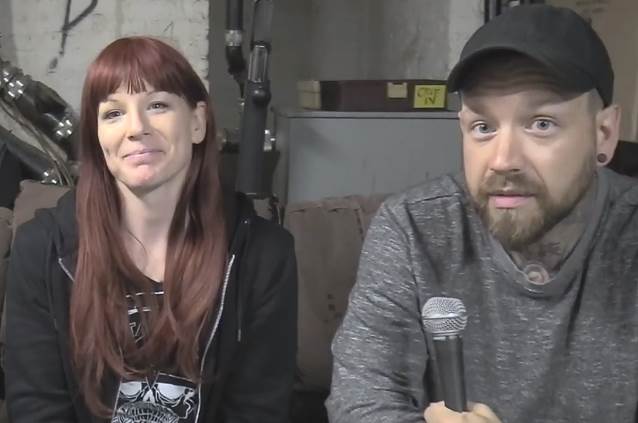 Alex Haber of Heavy New York conducted an interview with frontwoman Candace Kucsulain and drummer Dustin Schoenhofer of Detroit metallic hardcore veterans WALLS OF JERICHO prior to the band's June 10 concert at St. Vitus in Brooklyn, New York. You can watch the entire chat below. A few excerpts follow (transcribed by BLABBERMOUTH.NET).

On their most recent studio album, 2016's "No One Can Save You From Yourself":

Dustin: "I think that it's crazy that people still care."

Candace: "Yeah, it's pretty amazing that people still care, but honestly, we care, so that's what matters the most. [Laughs] It's been really cool to come back and do the U.S. because we were not doing it so much before. It's a time-sensitive type of situation. In the U.S. you have to tour quite a bit, usually three weeks, four weeks and we had an opportunity to do this tour, which is one week and we took it."

On whether "No One Can Save You From Yourself" marked a "fresh start" for WALLS OF JERICHO:

Candace: "I guess so. Yeah, if you think of it that way. We were amped to get back to it and create something again together."

Dustin: "A lot of the songs had been worked on for eight years. Some of those songs Mike [Hasty, guitar] had laying around and then we had worked on. We would work on stuff, but then we wouldn't work on stuff, then, finally, it all came together. It was kind of interesting how it worked."

On whether WALLS OF JERICHO has to adjust their setlist depending on who they are playing with:

Candace: "Yeah, a little bit. Different crowds create different vibes, so you use music according to that or what we're feeling per tour, is what you go off of. Our vibe and what we're willing to bring to the stage is reflected through the songs, so that's how we do it. We came from the hardcore punk scene. Smaller venues, more DIY stuff, where at one point, bands all meshed together: punk rock, hardcore, metal just kind of infused, then there was the separation of it. We just keep that spirit as much as we can."

On whether Schoenhofer has to be in a different mind frame to play in both WALLS OF JERICHO and fellow hardcore act BURY YOUR DEAD:

Dustin: "I actually, a lot of people don't know this too, but I sometimes sit in for V.O.D. [VISION OF DISORDER] and that's kind of interesting, too. So, if you take the three bands that are all hardcore bands at heart and you have to take a different approach to each band as a drummer. To me, as a drummer, I look at it as, you have to play what the music is. You can't just interpret it yourself. You have to play what was written and recorded out of respect for the people who wrote and recorded that stuff. Yeah, of course, it's definitely a mind frame to get into, a totally different vibe."

On whether playing in different bands allows him to experiment more in WALLS OF JERICHO:

On the variety of musical tastes within WALLS OF JERICHO and how far they are willing to venture outside of their core sound:

Candace: "Music is music. We're not going to bring country, but music is music and we enjoy all of it and elements that come with it. We can record music like that all we want because that's us, that's us being able to express ourselves through our music which we're allowed to do because it's our band. What we want to create at shows and onstage is just a different vibe, which is why we don't bring those in. Some bands will mesh those together, but that's not what we want. We want just straight energy and raw power. We started as a band that had a certain type of vibe and that's what we want onstage and that's what we stick with."

On whether WALLS OF JERICHO writes and record songs with their live show in mind:

On the current state of the Detroit and national hardcore scenes:

Candace: "I was just talking about this with someone the other day. You go into a show and it's this welcoming family that you got to be a part of. Everybody had this like-mindedness and similar goals of what they wanted the world to be. It was more about creating something together, a vibe together, a change together. It wasn't as much about the riff, the breakdown, the competition. It was just you were there; a band would play and you would enjoy their music no matter what and had this sense of respect for it and I feel like that's completely lacking in the scene now. I can go to a show and if a shit-ton of people are dancing to a band, chances are, I don't like them. [Laughs] It's my rebel mentality of, 'It's not about what's popular. It's about what you're saying, it's about what you're doing and who you are.' It's just different and Detroit embodied that, like 'We are here. This is a statement of who we are and what we believe in.'"

"No One Can Save You From Yourself" was released in March 2016 via Napalm Records.